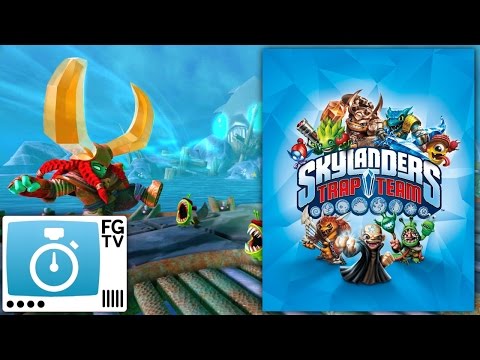 1. Genre and story:
Skylanders Trap Team is a action platforming game where players explore a level based world to defeat the Doom Raider villains. This plays a little like the Lego video-games with shooting and hitting to kill enemies and a variety of puzzles to solve.

Characters are unlocked for on-screen play when a toy figurine is placed on the portal peripheral. The starter pack provides the required (new) portal for Trap Team along with two toy characters and two traps. The traps are this year’s novelty allowing players to capture any of the 40 villains and then play as them.

The final addition this year are the Minis, fully featured miniature versions of the big Skylander characters.

2. Developer:
Skylanders Trap Team is developed by Toys for Bob who created the first two games.

Toys for Bob developed the Wii, PS3 and Xbox 360. Beenox handled development of Wii U, XBox One, PlayStation 4 and 3DS. Vicarious Visions developers the iOS and Android version.

Support for the Wii is notable as Disney Infinity has now dropped this older platform. Buying the Wii game also provides a free download for the Wii U, offering an easy upgrade to that system reusing the Wii portal.

A 3DS version is also available but offers a less complex experience. It does however provide a local multiplayer version of Skystones Smash (a popular aspect of Skylanders that is a tile based strategy game for two players).

5. Length:
Skylanders Trap Team will take competent players 10 hours to complete, although there will still be plenty of side-quests and other things to go back and do. Also the game offers different difficulty levels that encourage multiple play throughs.

Characters and Traps are released in waves through the year which again stretches the duration it will be played in a family provided additional money is spent on each new wave of toys.

6. UK and Europe – PEGI rating and additional consumer information:
http://www.pegi.info/en/index/
PEGI rated Skylanders Trap Team PEGI 7 for Fear and Violence. Similar to previous Skylanders games this is likely because it includes “Non realistic looking violence towards fantasy characters – Violence that is set in a cartoon, slapstick or child like setting that could be upsetting to very young children – Pictures or sounds likely to be scary to young children.”

UK packaging also notes the game’s toys represent a choke hazard to children three and under. Rough treatment on the toys can result in small parts becoming detached.

7. US – ESRB:
As with previous Skylanders games Trap Team is rated ESRB 10 for comic violence and comic mischief.
http://www.esrb.org/ratings/search.jsp

8. Common Sense Media:
Common Sense media https://www.commonsensemedia.org/game-reviews/skylanders-trap-team suggests that the game is suitable for children 10 and over. Parents should know that “Skylanders: Trap Team will tempt kids to buy additional toys to enhance the game experience.” but that “Kids can use their existing collection of Skylanders toys from previous games to help limit costs”. In costs they suggest that kids will “need to spend at least $125 beyond the price of the starter pack to be able to unlock all of the game’s secret areas and special quests.”

9. Themes:
Trap Team follows a traditional “heroes in peril” plot similar to kids movies. Certain characters use “black” magic that some families may not appreciate. Some villains, although presented as a cartoon, characterize scary monsters or mechanical creations with flip up faces and chainsaw attacks.

10. Why people play:
The combination of a collectable toy-line and video-game is compelling for young players. The game balances the requirement to buy new toys and being able to re-use your existing collection. Extending the in-game adventures to the living room carpet creates a magical experience for families.

The toy and in-game character designs are exceedingly high quality. Being created by a small team of artisan designers they escape feeling overly commercial and buck the blue-pink or buff-slender gender pitfalls. Providing parents are willing to say no to requests at supermarket checkouts for more toys this is a great game offering a lot of value.