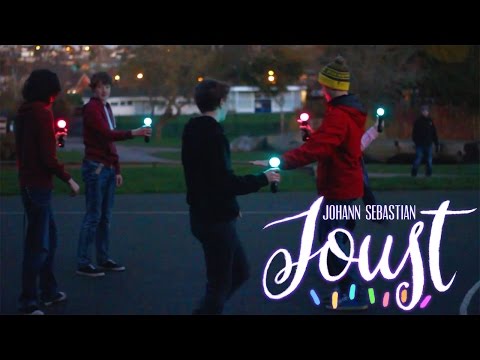 The definitive guide to Johann Sebastian Joust on PlayStation 3, PlayStation 4, Mac and PC. We talk to the game creator Douglas Wilson who discusses all the different game modes.

Teams:
You can opt to play Joust in teams, indicated by matching controller colors. This not only alters the pace of the game but the tactics required to win. Players must help defend their team-mates as well as attack the other players.

Teams can be selected at random or by pressing a particular coloured button on the controller — which itself can be a game of double bluff as players try and pursued each other onto different teams.

Freeze:
At random moments in the game the announcer will instruct players to freeze and their controllers will turn a pale icy blue. Everyone must not move a muscle as the sensitivity of the controllers becomes temporarily super high.

Conductor:
Rather than having the music change speed at random one player can use their Move controller to dictate how fast the music plays and accordingly how fast the players can move. There’s quite a sense of power and it’s a great way for the youngest family members to join in with the action.

Invincibility:
This enables players to employ a time limited shield. While it is on they can move as much as they like without going out, but if they hold the button down for too long they will run out of energy and put themselves out.

This adds another type of tactics as players eek out their supply of shield energy. While the button is pressed the controller light slowly dims so they can see how much energy they have left. Get it right and you can flee from another player’s attack, or move in quickly for the kill.

Lives:
Players can be granted more than one life. This turns Joust into more of a war of attrition. Players can take more risks while their stock of lives remains high but must be more careful as they deplete. Each lost life is signified by the controller going Red and then going out.

How long it takes a player to return to the game after loosing a life can also be specified. I’ve used this set to 30 seconds at times so that players have to go and wait in a holding area before they come back — or sometimes lie down on the ground.

Resurrection:
Resurrection is another way to extend the duration of the game. Once a player has run out of lives they can attempt to get back into the game by pressing and holding a specific button. However this only works if they keep the controller still — so players still in the game can stop other resurrecting by moving them every now and again.

It creates some unexpected turn arounds in team games, particularly if team members come and protect downed comrades while they resurrect themselves. This can be quite a powerful feature but it can be limited by the number of times each player can resurrect.

Traitor:
When playing with teams you can select to have traitors in the game. During the game’s countdown sequence certain players controllers will secretly vibrate telling them (but no one else) that they are in fact on their own team rather than the colour of their controller.

The traitor surreptitiously tries to get the other teams out (including her own team) without teammates realising she is a traitor. The team is also trying to determine who the traitor is so they can eliminate the threat (as well as beating the other team).

The traitor can not win with her team and her team cannot win while she is still in the game. This often means that towards the end of a round only one team color is left in and players start trying to convince each other who is and isn’t the traitor. What started as electronic tag turns into a parlour game of bluff and counter bluff as previous behaviour is pointed to as reason for believing a certain player is (or isn’t) the traitor.

The round ends when the traitor and the other team have been eliminated. It also ends if only the traitors are left in the game and the “Traitor Team Wins”.

Exclusive Kickstarter-Alpha Modes:
There are other settings that were available in the alpha kickstarter version of the game.
Sudden Death – Choose whether, after a a certain period of time, a round will go into an extra-sensitive sudden death round.
Dark Joust – Designed to be played in pitch black. The controller light is off by default. However When a live controller is jostled, the light will flicker on temporarily giving away the location of the player.
Hit Points – Players weren’t defeated when they moved the controller too much. Instead this depleted their hit points and the controller light slowly faded until none were left.
Kings – One team member is assigned as your King player. They are identifiable to everyone by a different shade of light on their controller. The King must be defended by their team because if they are eliminated the whole team wins. Kings are also more vulnerable to attack.