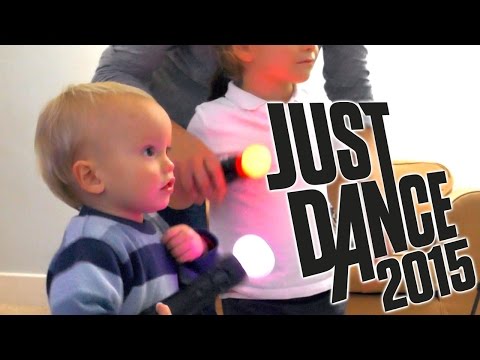 We took Just Dance 2015 to the Hunts for a family dance battle. They chose to throw down their moves on the sing along version of Let it Go from Frozen.

The game is available on all formats from Xbox 360 to Xbox One, PlayStation 3 & 4, Wii U and even the Wii which is good to see as not many new games coming out there these days. On each platform the game is essentially the same but the controls are different.

For our money the PlayStation 4’s light-up move controllers make a real difference here as they clearly show which player is which and pulsate in time with the music.

If you use a camera controller like Kinect or PlayStation Eye, this also enables you to share your dance videos with other Just Dance players around the world. Another nice touch for families.

A mobile version of Just Dance is out this year as well, called Just Dance Now. This lets you use a mobile phone to control the action and without a console required — you just connect to a computer screen. This phone dance feature is also mirrored on the PlayStation 3/4 with the ability to download an app on your Smartphone that then lets you use it as a controller.

It is worth bearing in mind that the PEGI rating for the game (3+) relates to the music on the disc rather than tracks you download. That said, the silhouette style presentation and sensibly shaped on-screen dancers that have been chosen steer this away from the classic hourglass pop-video look.

The families we tried this out on had played Just Dance before but found this to be the best version yet.