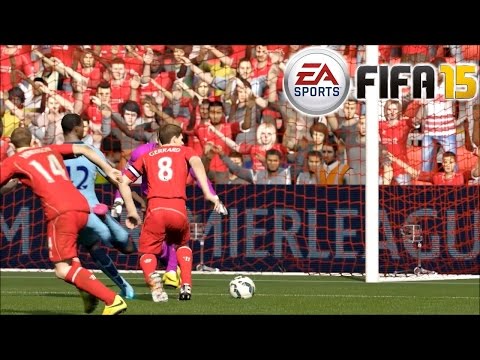 We take a look at the new demo for Fifa 15 ahead of its release on September 26th. There’s a lot of improvements over last years effort and we dive into a match to see how much better this latest version is.

We look at the PC game which joins PS4 and Xbox One on the Ignite engine this year.

It’s easy to dismiss yearly iterations of sports games as barely more than roster updates but the team working on Fifa has in recent years made such dramatic improvements to the game that each new version is worthy of purchase.

The demo for Fifa 15 showcases some impressive advances in game technology thanks to the new Xbox One and PlayStation 4 consoles pushing development further.

Firstly there’s the new coat of paint given to the visuals with player models looking even better than ever and little details, like blades of grass on the pitch and player clashes living marks on the surface making Fifa 15 look and feel closer to the beautiful game.

The weakest aspect of last years game – goalkeepers have had a massive overhaul – new animations and AI mean the last line of defence acts and behaves closer to the real things than before. We can see these new animations in the video almost immediately with one-handed shot stopping and new diving animations looking impressive. Best of all the new presentation dynamics make the immediate replays, with their super-slowmos, actually watchable unlike previous versions.

Other improvements seen in the demo come from a cleaner interface for making substitutions or changing tactics in-game. These may seem minor but it makes a massive difference compared to the clunky and unresponsive menus of Fifa 14.

So does this mean Fifa 15 is looking like the perfect football game to buy this season? From what the demo shows it certainly does but some niggles remain. Penalties still seem to be given randomly at times and saving them even more of a lottery even if you dive the right way. The interface for instant replays still feels too complex unless you’re used to creating videos in Final Cut and some commentary repeats itself far too often.

The demo doesn’t show any more than the game engine and match menus, leaving only a brief demo for Ultimate Team lacking in any new content but if the same level of polish and realism carry over to other aspects of the game then Fifa 15 is shaping up to be EA’s best version yet of the beautiful game.