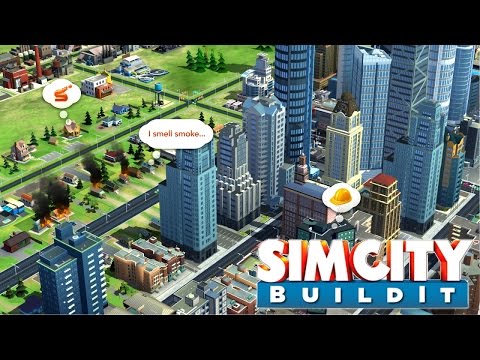 As someone who had just finished GCSEs when Sim City 2000 came out, a good proportion of my time at college was spent playing that game. It was truly one of my favourite gaming experiences of all time. There was just something about the satisfaction of building a thriving city that I really loved, and if your city didn’t thrive then you could always press a button and have Godzilla come and destroy a large chunk of it.

These days I’m a full time technology and gaming journalist, with a young family who I’m hoping to get interested in games, so we can enjoy them together.

So EA’s announcement, via twitter, today that “Sim City Build It” is coming to Android and iOS devices soon is thoroughly exciting. Sadly, there’s not a lot more detail about the game itself bar three screenshots that have been posted on the official website.

It’s fair to say that the rebooted Sim City game that launched for PC in March 2013 was not exactly well received by many gamers. There was a lot of criticism about the size of maps, and weird AI logic that did make for some weird in game quirks. But you know what, I did really like the game. Graphically it was beautiful, and it was enjoyable to build up a city, which was, after all, what I’ve been craving since I played 2000 all those years ago.

Bringing a version of the game to tablets and phones makes sense though, after all, these are point and click games that can be well-translated to a touchscreen device and modern phones and tablets have loads of power that’s ideally placed to make a game like Sim City very playable

The screenshots do look good though, so let’s have a quick peek now to see what clues we can find about how the game might play. Firstly, from the screens, it looks like graphically it feels like it will be a good-looking game. With the natural pinch and zoom interface of the iPad and other touchscreen devices we can imagine that whipping around your virtual world will be both logical, and speedy.

The first two screenshots seem to show the same area, but one is taken during the day and one at night. In the background, you can see the boundary lines that have become the focus of some rage on the PC version, as many felt the game was too limited, in terms of map size. Indeed, there are also boundary lines at the front, on the seafront, which implies that the map size is pretty small in this example. But it’s a bit early to judge at the moment, still, small maps might not be a problem if the game is well-designed and there’s plenty of other things to do.

There is also a power plant lurking in the top right, so it certainly appears that the same basic formula is in place, namely, give your sims power, roads and some zoning and they’ll take care of building a city for you. As people play mobile games differently to PC games, it’s certainly interesting to consider what elements might be put in place to have you constantly returning to the game to check on progress. No doubt earning currency will be a part of that, but will a city that’s left alone degrade over time? That’s not really the case on the PC version, so will things be different on mobile.

The third screenshot is different, but still basically the same region, just zoomed and rotated slightly. Here though, we can see that people are making their usual demands. Oh no, my house is on fire, they complain, so that’s no doubt our cue to start investing in fire stations to keep them alive. Again though, the play area still looks quite small in this screenshot, something which could mess up our enjoyment of the game.

Our main hope though, is that the game doesn’t follow the freemium or pay-to-play model. What we want is to throw some money down up-front, and be able to enjoy a proper Sim City experience, without having to wait hours to collect coins, or pay for in-game currency.

With a game like Sim City, it does seem logical that EA would go down the in-app purchases route, either you wait an age for your Sims to make money, or you buy coins or buildings to move the process along. It’s perhaps not fair for us to worry about such things before the game comes out, and only time will tell what route EA is going to take with Sim City BuildIt.

For now though, we remain excited about one of the best game franchises of all time coming to mobile devices. And it reminds us how much we need to see Command & Conquer for phones and tablets.