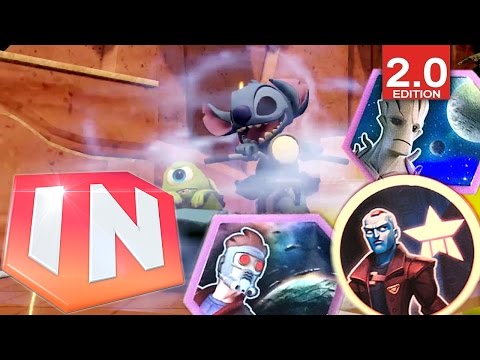 All the news, rumors and gossip on Disney Infinity in one place. We spend hours hunting around so you don’t have to.

Earlier this week we brought you the big Disney Infinity reveal of two new characters, Stitch and Tinker Bell. Later that day we got a trailer for those characters which shows off the in-game versions, but also gives away some of the other content we can expect in Disney Infinity 2.0. Glimpses of toys, buildings and backdrops from Bedknobs and Broomsticks, Gravity Falls, the Disney Theme Parks and more can all be spotted in the video. However, perhaps the coolest treat is saved to last, as we get to see the new paint guns that can be used to decorate your toy box in a multitude of colours.

In this latest of in our series of What We Know videos for Disney Infinity 2.0, we’ll walk you through the trailer, discuss Disney Originals and show you some great new images of the Stitch, Tinker Bell and Maleficent toys. It doesn’t end there though, as we reveal the next rumoured Disney Original character, Aladin. Then we have a look at the Guardians Of The Galaxy rumours with our first image of the play-set packaging.