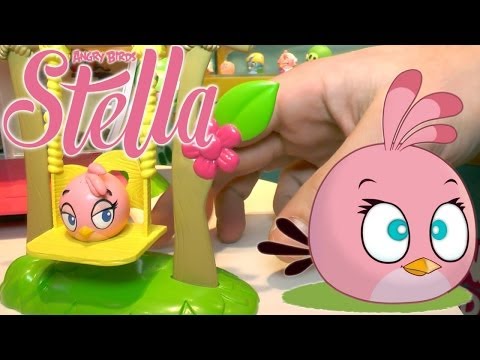 We get hands-on with the Angry Birds Stella toys and telepods. This takes the pink female character from previous games and creates a new experience around her that seems to be more aimed at the female market.

“This is the official unveiling of Angry Birds Stella, a brand new franchise from Rovio that will be launched in Q3 of 2014. A new flock of birds and a new magical island adventure, honing in on new values and other fun elements we haven’t been able to tackle before.”

Laes talked to us about Stella’s new game-play mechanics, “retaining some of the core elements, introducing new things and some things never seen before in the franchise. It’s the same lose universe as the other Angry Birds games but super approachable more social and more variety than what has been seen before.”

There could be some criticism here that Rovio is taking the easy “pink it and shrink it” approach to attracting a female audience, rather than offering something substantial and compelling for those players. Cuevas is robust in her answer here “Stella offers a strong female heroic character. Over 50 percent of our gamers are female now we get to reward them with a brand that speaks to them.”

Asking Laes how Stella compare to other Angry Birds franchise launches give a feel for how important this is for Rovio. “It’s bigger in some ways than Angry Birds Go! or Angry Birds Space. It’s a lot more epic. We haven’t done an animation series for Go! or Space but for Stella we are doing that.”

Cuevas expanded on some of the Angry Birds Stella plans “We have Angry Birds the Movie coming out 4th July 2016. Rovio is producing the movie and Sony is distributing it. This is part of the move into the entertainment realm and solidifying that position.”
http://www.youtube.com/watch?v=TUr3XZ2BF_w

Putting the pieces together it becomes clear that Rovio isn’t really targeting Activision and other games companies as their competitors, but is transitioning towards being an entertainment company more like Disney.

This makes Stella all the more interesting from a commentator’s point of view, and all the more important for Rovio. Here we see not only a new video-game, but consumer products and media all come together to create a new franchise that spans many different markets.

I’ll leave you with my hands-on with the toys (although not the game yet) from Toy Fair, along with the first few names of the Stella flock: Willow, Luca and Poppy.