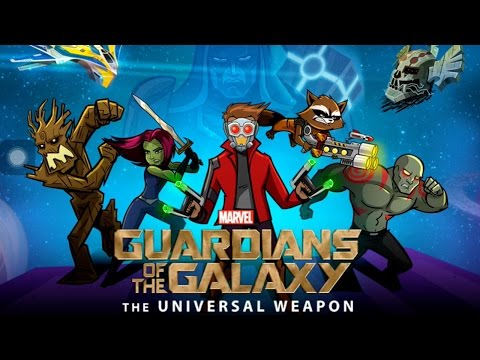 We’re fast approaching the release of Guardians Of The Galaxy in cinemas worldwide and in support of that release, Marvel have just published Guardians Of The Galaxy The Universal Weapon on Android, iOS and Windows. The game let’s you take control of the five core Guardians team members, Star-Lord, Gamora, Drax, Groot and Rocket Racoon as you construct a team capable of recovering the five pieces of The Universal Weapon and unveiling the identity of the Guardians’ Shadowy Nemesis.

The game has a light-RPG style that’s heavy on arena based combat. Battles happen in real-time and use gesture based controls to move your team around the environment and engage the enemy. Each character earns experience from battles that can be used to upgrade their special abilities. Team combos can also be implemented to gain the upper hand in combat and an arena mode let’s you really test your skills as you fight wave after wave of enemies determined to take you down.

Beyond the five main characters, further characters are available to unlock as you progress through the sixty levels that make up the game, which are spread across 6 inter-galactic worlds. The game features no in-app purchases and retails for £2.99 in the Android, iOS and Windows app stores, but is also available on PC via the Windows Store for £5.99.