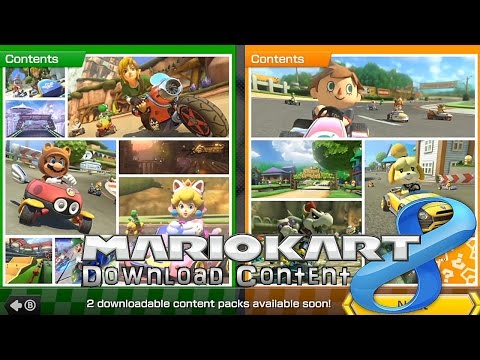 In a move that many Mario Kart fans have been hoping for, Nintendo have finally announced plans for additional downloadable content for Mario Kart 8. Currently available is a free pack of three super-deformed Mercedes cars, the GLA, 300 SL Roadster and Silver Arrow. However, two further packs of Nintendo themed DLC are coming over the next nine months.

First up in November is the Zelda pack, containing three new characters, four new karts and eight new tracks split across two cups. Link, Tanooki Suit Mario and Cat Suit Peach will be joining the roster and there’ll be karts (like Blue Falcon) and tracks from F-Zero amongst other popular Nintendo franchises (possibly Excitebike) as well as returning tracks like Wario’s Goldmine.

The second pack then arrives in May 2015 and brings Animal Crossing characters, Isabelle and the Villager along with the welcome return of Dry Bowser. Little else is known about the pack, but buying both packs will also grant you access to eight different coloured Yoshis and Shy Guys. The latter being available as soon as you preorder.

This is the first time in Mario Kart history that the main game has been extended in this way and should help give extra life to the game through 2015 and hopefully beyond. Pre-ordering either pack today will cost £7, but you’ll save £3 if you pre-order both for £11.