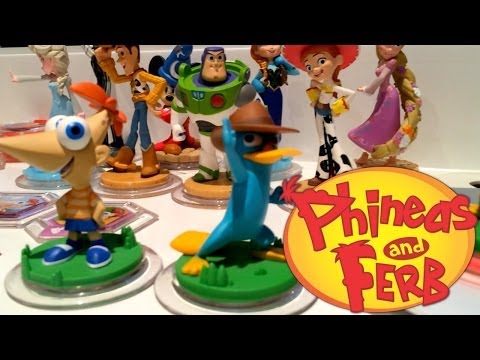 At New York’s American International Toy Fair I had the chance to play what seems to be the last of Disney Infinity’s characters, in the form of the Phineas and Ferb Toy Box Pack. The name is intentional as this re-iterates that these are characters for use in the Toy Box and don’t have their own Play Set adventure like Pirates of the Caribbean, The Incredibles, Monsters University, Cars and the like.

Don’t let that put you off though, this is another set of beautifully crafted new characters from Disney Interaction in both physical and virtual form. The two figures in the set are Phineas and Agent P (from Disney Channel’s animated series Phineas and Ferb.

Although there isn’t a main pre-built adventure for them you do, like for all figures, get a mini-adventure in the Toy Box game creation mode. This time it’s side-platforming action and top down Spy Hunter style play.

The pack will also come with two Power Discs — the Tri-State Area Terrain texture set (that changes how a Toy Box world looks and the Danville Sky skydome (that changes the world’s backdrop).

For families that have been enjoying making their own games in the Toy Box, and fans of the show, this will be much anticipated. For those who haven’t yet tried out the game creation mode in Disney Infinity perhaps this is the time to try it out.

I was surprised how quickly even my younger children took to it. Provided some parental assistance is on hand, a bit of patience and a bit of learning what can be achieved is impressive. Perhaps it’s not surprise that Disney Infinity has been turning up in class rooms recently too.