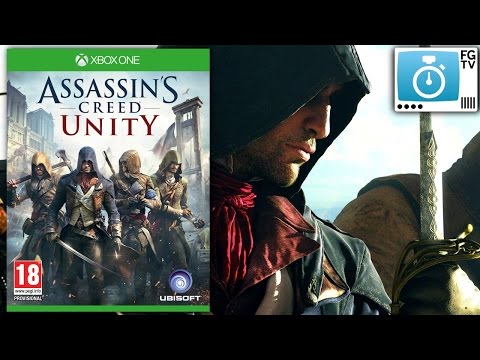 Family guide to Assassin’s Creed Unity. From what makes this game so great to what to watch out for here’s our two minute guide.

1. Genre and story:
Assassin’s Creed Unity is the latest in the blockbuster Assassin’s Creed series, that put you in the shoes of assassins in various periods of history. Your character is viewed from a third person perspective, and gameplay involves running, jumping and climbing around revolutionary Paris as well as stealthily tracking down and killing enemies. The game can be played single player, but also with up to three other online players to complete certain missions.

You play as Arno Dorian, a young assassin seeking revenge for the murder of his father on the eve of the French Revolution. Arno will encounter significant figures of the period such as Robespierre, a young Napoleon and the Marquis de Sade. Combat in the game has been significantly revised with a new system inspired by fencing, and the navigation system has also been overhauled. For the first time, player’s will also be able to customise the lead character to improve specific skills.

3. Format:
Assassin’s Creed: Unity is exclusive to next gen consoles, available on Xbox One and PS4, as well as PC.

4. Cost:
The game costs £54.99/$59.99 on all formats, though more expensive collector’s editions and bundles are available. A season pass costing £20 allows access to downloadable content including an entirely separate side-scrolling game set in China. A subscription to the PlayStation Network or Xbox Gold Live membership is required to play online, and this costs extra.

5. Length:
Unity’s main storyline should take around 20 hours to complete, although for experienced players this may be closer to 15 hours. Completing all side missions and finding all secrets should considerably lengthen that time.

6. UK and Europe – PEGI rating and additional consumer information:
In the UK and Europe PEGI rates the game 18 with content descriptors for extreme violence, multiple motiveless killing, violence towards defenceless people and strong language. PEGI states that, ‘though discouraged, the player an make their assassin attack multiple pedestrians, with realistic and bloody effects’ and that Unity features ‘several scenes of gross violence, including one scene in which a man is held down and has his foot sawn off, so that he might make money from begging’, and that there are ‘several scenes of beheading.’ The game also contains the word fuck, and online play may result in encounters with online players.

7. US – ESRB:
In the US the ESRB have rated Unity as M for Mature, unsuitable for under 17s, with content descriptors for blood and gore, intense violence, sexual themes, strong language and use of alcohol. The ESRB goes on to say that ‘Players use swords, muskets, concealed spikes, and poisonous blades to assassinate characters’ as well as ‘engage in swordfights with armed soldiers, often resulting in characters getting impaled.’ They also note that ‘cutscenes sometimes depict civilians getting stabbed, burned at the stake, and decapitated by guillotine’. The ESRB also notes the sexual content of the game, with the presence of brothels and prostitutes, and sexual remarks referring to bestiality and other sexual acts.
http://www.esrb.org/ratings/synopsis.jsp?Certificate=33646&Title=Assassin%27s%20Creed%20Unity%20

8. Common Sense Media:
Common Sense Media describes the game as ‘probably not for kids’ and states that ‘the game focuses heavily on stealthy violence. Expect plenty of blood and some disturbing scenes, such as hangings and beheadings.’

9. Themes:
Violence for political ends is baked into the Assassin’s Creed concept, as is the ongoing conflict between the freedom-expressing order of assassins and the authoritarian, power-grabbing Templars, and the French Revolution provides a perfect backdrop for these themes to be explored fully.

10. Why people play:
As the first Assassin’s Creed game to be released on next-generation platforms Unity needs to deliver a next generation experience, and indeed the combat system and many other features of the series have been overhauled. Four player cooperative play provide an experience unseen in previous Creeds, although some missions will be single player only.

It’s the setting and time period that offer most promise though. The French Revolution, and the city of Paris, have been on wish lists for the series since the very first game, and the chance to scale Paris’ landmarks as an agile assassin, or experience the revolutionary fervour on the streets of the city, should provide plenty of excitement for eager virtual tourists.