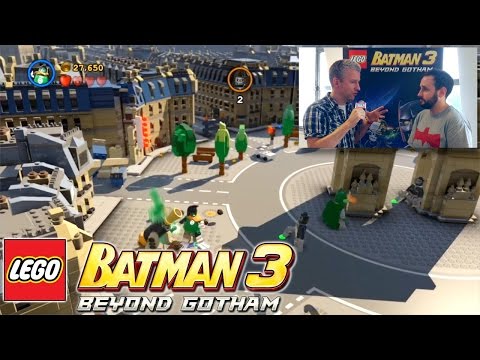 TTGames Executive Producer, Phil Ring, talks to us here at Family Gamer TV about the upcoming release of Lego Batman 3: Beyond Gotham. With the expansion of the game beyond the confines of Gotham and into the wider DC Comics Universe, Lego Batman 3 will take us around the globe and around out into deep space to explore the Lantern Worlds, home of the various coloured Lantern Corps.

After saving The Watchtower from The Legion Of Doom, Batman, Superman and the rest of the Justice League will attempt to track down Brainiac and put and end to his evil schemes as he looks to shrink Odym, Nok and the rest of the Lantern Worlds. As you’ll hear from Phil, it’s been a brand new experience for the developers creating these worlds and they’re confident you’ll have a great time with the game, as each of the Lantern Worlds brings a whole new environment for you to explore and 150 unique playable characters to unlock.