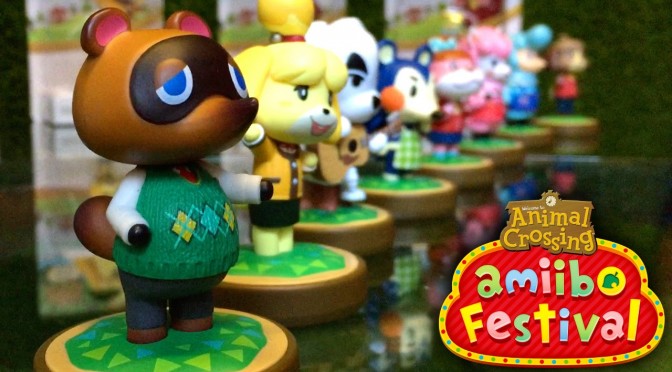 Amiibo Festival offers a central board game element. This looks a lot like Mario Party and some have been mistaken in thinking it’s another electronic board game with an amiibo skin. Like Mario Party you still use your amiibo (beautiful Animal Crossing amiibo in this case) to select a character and roll the dice, the feel and pace of this experience is substantially different.

Rather than a super competitive strategic board game, the amiibo festival dice and counter play is more sedate. Players take turns to move around the board rolling dice as you would expect but this is as much about spending time together meeting the different characters as it is competitive.

Dessert Island Escape – This one-player game lets you control a team of three different characters. Each character has different powers, but they’ve got to work together to gather materials and get off the island.
Acorn Chase – A game where you must collect the acorns before being caught by Resetti. The twist here is that you can only control the movement by placing different colored amiibo cards on the Wii U Gamepad. It turns into a challenge of memory, dexterity and fast reactions.
Quiz Show – Test yourself against your friends in an Animal Crossing-themed quiz show.
Balloon Island – Reminded me of Monkey Target in Monkey Ball. Each player uses an amiibo card to control the descent of their character and must time this perfectly to land on the target for a score multiplier.
Mystery Campers – This is like the Mastermind board game where you must try to guess which of 6 amiibo are hiding in tents by trial and error. Each time you are told how many you got right. Applied logic and strategy are key to winning.
Fruit Path – Players aim to outwit their opponents by using the dice symbol on amiibo cards to advance their player in an experience that’s a little similar to Pontoon.
amiibo Card Battle – Players pick six amiibo cards and then take turns to draw one each. The aim is to match the different star signs on the cards with that that appear in the crystal ball.
Resetti Bop – Whack a Mole in Animal Crossing style. Here though you must not only place the amiibo card of the right color on the Gamepad to trigger the hammer but also be sure that you will win the Rock-Paper-Scissors challenge on the card you choose.