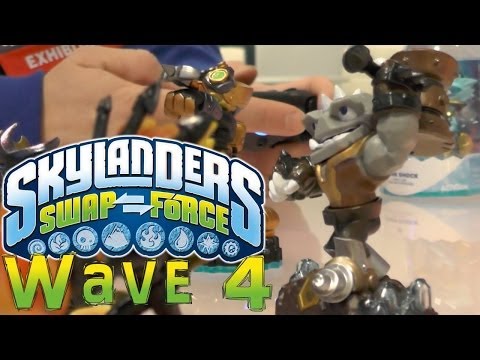 At this year’s New York toy fair the atmosphere around the Skylanders booth was muted. Unlike the previous three events there was no big announcement of a new game. As Eric Hirshberg confirmed in last week’s earnings call, Activision will follow a different time line this year with the Skylanders announcement expected later in the year.

However, the new Wave 3 and Wave 4 Skylanders were present and correct at Toy Fair. Of particular note were the Easter branded characters, packed in egg shaped blister packs. Head of the bunch here is the pastel Easter Egg stylings of Springtime Trigger Happy. Providing you can skip past the difficulties of a weaponized Easter (with a small monster riding a bomb) he is a lot of fun to play — not least as his decals come into the game itself rather than remaining a physical novelty.

The three Swap Force characters in Wave 4 are Trap Shadow, Freeze Blade and Doom Stone. Each of these extends the range of moves and movement available to players nicely. As with all Skylanders characters they are well realized and distinct from other Swap Force figures.

Information I was provided also suggest that we will see a Light Core, illuminating, version of Countdown and Wham-Shell as well as the first outing for new core characters Scratch, Fryno and Punk Shock.

Wave 4 is then rounded off with s clutch of re-released figures, Fire Bone Hot Dog and Turbo Jet-Vac. As these offer a fresh version of existing characters, parents may want to think twice before investing as it is only the new Wow Pow attack and physical toy that differs from previous versions.

Based on my information, cross referenced with Amazon, here is what Wave 4 promises to provided when it is released around Easter:

As time passes it seems that there is more change afoot this year than had been assumed by players. Upsetting the apple cart with a fresh approach may sound risky, but Activision has been known to surprise in the past — as it did with the original Skylanders: Spyro’s Adventure game.

What this departure or big change may be only time will tell. Assuming it is developer Toys for Bob at the helm again this year would suggest a move towards more role-play mechanics. There will need to be a big hook to ensure the franchise’s continued momentum, but perhaps that will be more substantial than the novelty of previous years.