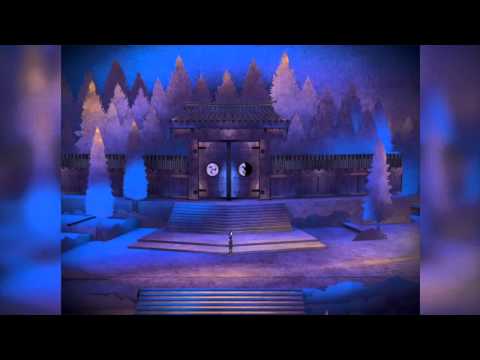 Nyamyam announced today that its Japanese pop-up game, Tengami, is now available for iPad, iPhone and iPod Touch (coming later for Wii U).

Tengami is an unusually atmospheric video-game set inside a Japanese pop-up book, drawing on dark fairy tales and a hand printed paper aesthetic. You wanderer the land and sea as it unfolds before you, solving puzzles by manipulating the 133 paper pages.

The game is surprisingly relaxing to play and offers families a fresh way to enjoy a video-game together. A part of this is the soundtrack created by composer David Wise, who was responsible for the music in the Donkey Kong Country series (including the latest installment, Donkey Kong Country: Tropical Freeze).

Tengami is powered by Nyamyam’s proprietary pop-up engine, called the Paper Kit. This uniquely makes the creation of authentic digital pop-ups possible and draws on the game’s Havok Physics, AI and Animation to recreate the sense of playing within the pages of a hand made story book.

You may not have heard of the UK based developer Nyamyam previously, but it comprises team members with a considerable pedigree. Jennifer Schneidereit and Phil Tossell founded Nyamyam in late 2010, after their paths crossed at Rare. Ryo Agarie, another Rare alumni, completes the trio.

Before founding Nyamyam Tossell was the lead programmer of Starfox Adventures (GameCube) and Kameo (Xbox 360). He was also the Director of Gameplay on Kinect Sports (Xbox 360 Kinect). Schneidereit started her career as a programmer for a Japanese developer in Tokyo where she worked on the Shinobido (PSP) and Way of the Samurai (PS3/XBOX360) series, before relocating to the UK to work as a designer on Kinect Sports. Agarie worked as an artist on the Perfect Dark (Xbox 360) series and was Art Director for the Xbox Live Avatars.