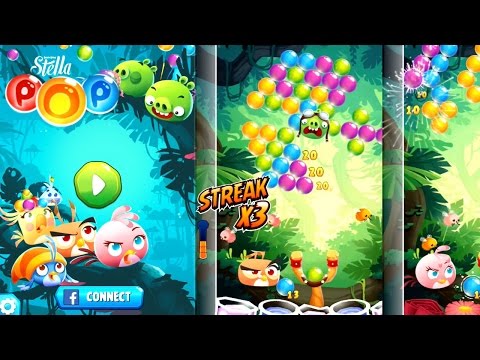 Rovio aren’t afraid to tinker with the Angry Birds formula. In 2014, three Angry Birds titles all branched out into new gaming categories and Angry Birds Stella Pop looks to be continuing that trend in 2015. With entries in the RPG, Kart Racing and Rail Shooter genres now established, Stella Pop takes us in a different direction with old school gameplay straight from the Taito classic, Puzzle Bobble (aka Bust-a-move). More recently this type of bubble flinging action has been found in King’s Bubble Witch Saga series of games and it’s a popular casual gameplay style that suits mobile devices well.

Angry Birds Stella Pop differentiates itself mainly with it’s branding, making use of the already established cast of characters from the original Angry Birds Stella with the green skinned pigs once again the villains of the piece. The goal is to knock the pigs from their bubbly perches, by flinging bubbles into the the varied shapes and structures at the top of the screen that protect them. Creating chains of the same coloured bubbles causes them to pop allowing you to progress further through the puzzles presented by each level.

It’s a simple and oft-copied style of gameplay, but it marries well with the Angry Birds brand and seems a good fit for the Stella spin-off. It’s a shame there appears to be no Telepod integration and that character themed levels don’t appear to bring any great difference to proceedings (at least on initial impressions), but for a free casual game, there’s plenty to enjoy. Notably, Rovio appear to have stepped back from the brink with their in-app purchases, reigning themselves in somewhat from the excesses of previous titles where £69.99 IAPs we’re commonplace. Now the limit seems to be £24.99, which is a far more sensible choice for a game that’s sure to attract plenty of younger players.