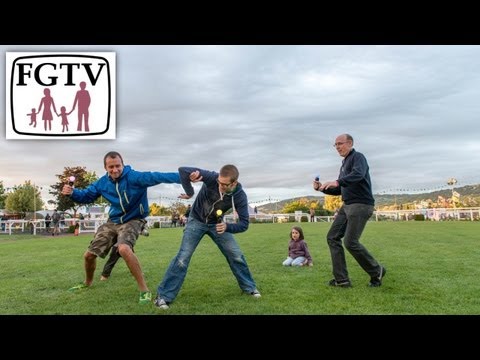 Johann Sebastian Joust is a game that straddles these two worlds. It is a video-game in that it uses PlayStation Move controllers, but equally it isn’t as there is no “video” element to the experience. It draws on board game’s ability to let players negotiate the rules of play as they experience it together.
If you’ve not come across it before, Johann Sebastian Joust at first appearances appears to be an electronic game of tag. Each of the seven players holds a PlayStation Move controller, that lights up to represent their “colour”. They are told that they must keep their controller still, but are allowed to try and move their opponents by any reasonable means. If you move your controller too much a sound fires and your Move light goes out.
Over this mechanic is layered a sound track, by default something from Bach hence the name. When the music plays fast you can move more because the sensitivity drops, but when the music plays slowly you must move less as the sensitivity of the controller rises. On occasion you are told to “Freeze” where you must remain absolutely motionless.
It’s a fascinating set-up but not one that can really be understood until you see it in action. Developer Douglas Wilson, was kind enough to provide a Beta version of the game for me to try out on the unsuspecting public attending the Greenbelt arts festival at Cheltenham Racecourse last month.