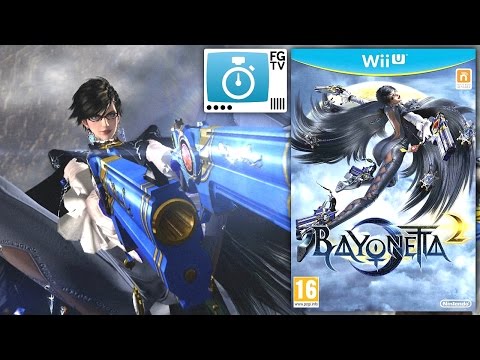 Our parent’s guide for Bayonetta 2:

1. Genre and story:
Bayonetta 2 is the sequel to Bayonetta. Like the original this is an intense third-person action game with a strong emphasis on combat, featuring a witch called Bayonetta who fights angels and other enemies with melee attacks, guns, and magic. There are combo attacks and special moves, but combat is intuitive, particularly at the lower difficulty options.

Bayonetta 2 is set a few months after the first game, and sees Bayonetta try to rescue her friend Jeanne from Hell, though the focus is more on the combat than the story.

2. Developer:
Bayonetta and Bayonetta 2 were both developed by Platinum Games, who also made Wii U exclusive The Wonderful 101.

3. Format:
Unlike its predecessor, which was available on both PS3 and Xbox 360, Bayonetta 2 is exclusive to the Wii U. It can be played with the GamePad, which includes touch controls, or with a Wii U Pro Controller or a Classic Controller Pro plus Wii Remote.

5. Length:
Bayonetta 2 can be finished in around 10 hours, though players will likely want to replay to see if they can beat the game on a higher difficulty level. Bayonetta could be completed in around 12 hours, though it would take longer for a player who wanted to collect everything.

6. UK – PEGI rating
In the UK and Europe, PEGI rates Bayonetta 2 as only appropriate for those aged 16 and older, for realistic looking violence, strong language, and online content. This differs from the original Bayonetta that was rated PEGI 18, perhaps for including things like the decapitation of a human-like character.
http://www.pegi.info/en/index/

The Games Rating Authority expands on its PEGI rating by describing the violence: “Most graphic violence is towards enemies during special finishers where there is blood and gore but only towards fantasy monsters. More realistic violence towards humans was where the protagonist was grabbed by the neck and lifted off the ground by enemy human-like character, with sounds of obvious pain and gasping before she was thrown on the floor.” It also adds that the game contains “frequent use” of the “f” word, and that “the protagonist also appears naked occasionally as she changes outfits before a battle”.
http://gamesratingauthority.org/pegi/search_aci.html

7. US – ESRB:
In the US, the ESRB rates Bayonetta 2 as M for Mature, i.e. only appropriate for adults, with content descriptors for Blood and Gore, Intense Violence, Partial Nudity, Strong Language, and Suggestive Themes. The description goes into detail on the kinds of violence Bayonetta can enact, specifically “finishing moves” such as “enemies thrown into spinning spiked wheels; character decapitated by a guillotine; a dragon ripping characters apart”. It also mentions that “large blood-splatter effects and gore can be seen frequently”.

The ESRB is also concerned about the “suggestive taunts and poses” of some of the female characters, e.g. “opening their legs, dancing on poles”, and the fact that “outfits are occasionally shed during battle, with characters’ breasts and buttocks partially exposed”. Swear words like the “f” and “s” words also appear in the dialogue.
http://www.esrb.org/ratings/synopsis.jsp?Certificate=33473&Title=Bayonetta%202

8. Common Sense Media:
Common Sense Media rated Bayonetta as not for kids, and says it’s likely the same will apply to Bayonetta 2. Its explanation refers to “lots of violence, blood, and foul language”, “instruments of torture, such as an iron maiden”, and “suggestive sexual imagery as the heroine doesn’t wear much clothing and can move her body in sexual ways”.
https://www.commonsensemedia.org/

9. Themes:
Bayonetta 2’s story borrows from religion, for instance with Hell used as a location. The fact that it combines more traditional religious ideas with things like witches and magic might deter some players.

Bayonetta wears revealing clothing and strikes sexy poses, with the camera often focused on specific parts of her body. Some critics believe that the game oversexualises Bayonetta, where others believe that the character has control over her sexuality and that things like the male gaze are used with satirical intent.

10. Why people play:
Whether or not Bayonetta is over-sexualised, her character appeals to lots of players, including a supportive female fanbase. But the main draw of the game lies in the combat, which people describe as “fluid” and “fun”, and the fact that the game has a range of difficulty modes that can make it both accessible for inexperienced players and a satisfying challenge for those who are more skilled.