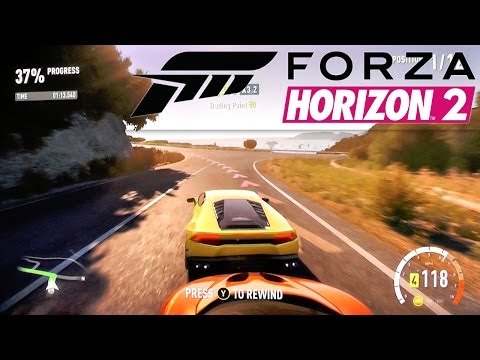 We have the first hands-on session with Forza Horizon 2 after the reveal of the game at the Xbox event.

Talking to Dan Greenwalt, Creative Director for the Forza franchise I was surprised to hear how much Horizon shared in terms of simulation code base. “This was built from the ground up for Xbox One on top of the Forza 5 graphics engine.” In terms of framerate Horizon again impresses running at 1080p at 60 frames per seconds.

I asked Greenwalt whether Horizon was taking its eye off the racing ball. “It’s hard to say if I’m honest. Forza is all about car culture. Motorsport is about competition, it’s about precision. Horizon is about fun and exploration. But that doesn’t mean it’s just about arcade. We have the same simulation modeling as Forza 5.”

Official blurb: “Turn 10 Studios and Playground Games debuted the first gameplay of Forza Horizon 2, highlighting its massive, wide-open world featuring dramatic weather and day-to-night cycles, all in beautiful 1080p resolution on Xbox One. In addition, the Nürburgring track for “Forza Motorsport 5″ was revealed. The full 16-mile combined circuit has been laser scanned at subcentimeter accuracy, was crafted from the ground up for Xbox One and is available now to all Forza Motorsport 5 owners for free.”