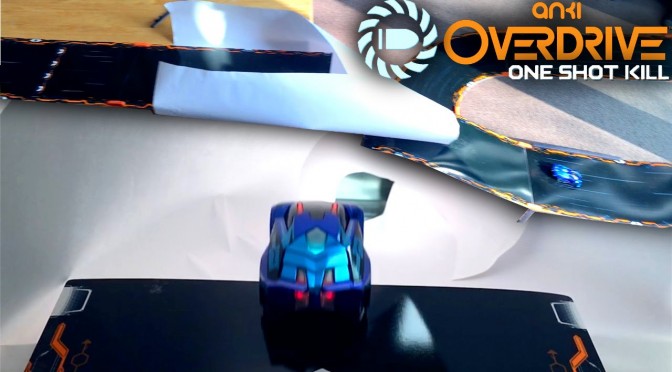 Along with a new track for you today we are testing the One Shot Kill and Balance Cars features from Anki Overdrive.

Modifiers will help gamers battle-race in their own exciting way. Activated while in Open Play mode, users can choose from one of two modifiers including “Balance Cars” and “One Shot.” In triggering Balance Cars, all upgrades will be removed from each commander, setting the stage for the ultimate true test of skill as players level the playing field. With the One Shot modifier enabled, players can keep the intensity at an all-time high as each commander is equipped with a golden gun where one well-aimed shot will disable their opponent’s vehicle.

The new update will also include changes to the track scanning system where now users can get right back into the action after a game without having to re-scan the track layout if it hasn’t changed. Conversely, if a player decides last minute to alter the battlefield after they’ve already hit the track scan button, they can hit re-scan without the need to go back to the beginning.

We stretch our creative track building skills with this Mario Kart inspired Anki car launch track. It’s made with a carefully constructed paper tube that guides the cars from the launch track back to the ground.

It’s not quite an Anki Loop the Loop but it’s getting close. The track works well and scans perfectly to enable full Anki Overdrive racing.

At the end of the month we’ll be challenging you to create your own tracks. These track can be any design and use any cars, craft, toys and tech. The only stipulation is they must fully scan in your video to prove they are use-able in real races not just demo mode.