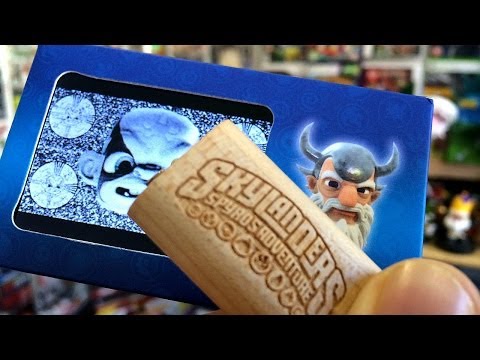 Having seen the different invitiations popping up online for the upcoming Skylanders events we were excited to recieve our own. Not only does Chaos talk about our “so called Great Britain” rather than “so called Big Apple” but it also has an earlier date than other territories of 22nd April.

I showed the invitation to my kids and they combined it with the Skylanders Key that surprisingly turned the video on and off when placed over Eon’s face. They are convinced that this is a hidden clue about the upcoming game. Their guesses based on this is either Skylanders Switch or Skylanders Keys, where you can use some kind of key to unlock different moves in the toys.

Although this is speculation there is some logic at work here as the interchangeable weapons spotted at the Mega Blocks stand at Toy Fair would need to work in this way. Switching a weapon or armour on the toy could then be refelected in the game. This also matches with Paul Reiche’s comments to One of Swords about the game drawing on their adventuring and role play roots.

It will be interesting to see what is unveiled on the 22nd. Why not drop a comment here and see if our combine Skylanders knowledge may hit it lucky by guessing what the next innovation will be.