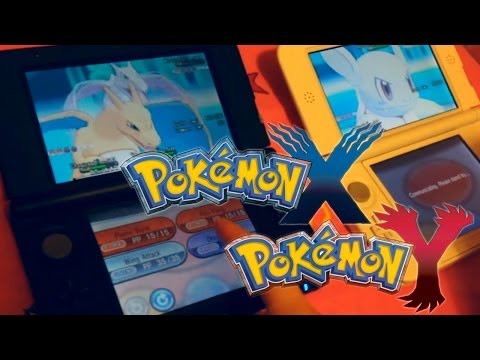 We test out Pokemon X/Y in a family setting and in particular look at the improved multi-player options in this 3DS iteration, both locally and over the internet.

Pokemon X and Pokemon Y is not only the first iteration on the 3DS, it is the first Pokemon game many new to the franchise will play.

Video-games, financially successful ones at least, don’t come in ones and twos. No, the games that get big sales are usually franchises. Whether that’s Minecraft, Skylanders, Beyblades or more mature titles like Call of Duty and Madden these experiences build year on year.

This is a double edged sword for families. While these franchises can offer on-going entertainment and often good value for money through their backward compatible features, they are also hard to jump into if you weren’t involved from the beginning.

Pokemon is one of these big game series that my family has been late to the party on. However, the latest iteration Pokemon X/Y (and first time on the 3DS) has been an ideal opportunity to get involved. It offers some improvements in both graphics as well as Pokemon training (the mega evolved and the fairy Pokemon for instance), but biggest feature for us is the multi-player.

By having a couple of copies of the game we can trade and battle our Pokemon. This has given us a slightly less challenging way to get our heads round how this all works — and without getting to stuck on the main story.

If you’ve not played Pokemon before these are essentially role play games where you collect a team of characters (the titular Pokemon) to go on an adventure and have battles with other Pokemon trainers you encounter. The novelty is that there are so many Pokemon to collect and train. In a family everyone will play it in their own way.