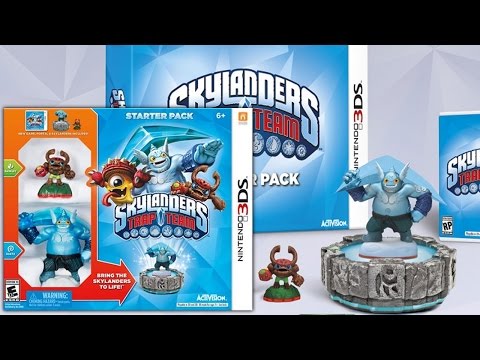 With the release of Skylanders Trap Team only a month away, there’s been a distinct lack of information revealed about the 3DS version of the game and this is proving problematic for many parents who may wish to pre-order. Previous 3DS versions of the Skylanders games have tended to be quite different to their home console counterparts and with information so scarce, it’s hard to know what this version is going to be like. The water is further muddied by the existence of the tablet version of the game, which is an exact replica of the home console version. Based on past experience we think it highly unlikely the 3DS version will follow the same path, but at the moment we just don’t know.

To make things even more complicated, today we can bring you the first official image of the 3DS starter set and that in itself presents plenty of questions. A previous image of the 3DS release showed two figures (Gusto and Barkley) alongside what appeared to be a regular Skylanders Portal, not a Traptanium Portal like those found in the home consoles and tablet versions of the game. The new image of the starter set also features the same figures and portal, which leads us to ask, “What about the traps?”. The portal in the 3DS starter pack appears to have no slot for the traps and the pack doesn’t feature any traps. Does this mean we won’t be trapping villains in the 3DS version? Perhaps trapping will be done entirely digitally or maybe the traps will just be placed onto the portal?

Without this vital information, Skylanders fans and parents alike are left in the dark about what they may or may not need to buy in order to get the best experience from the 3DS version or even if the 3DS version will be something they or their children would want to play. It would be entirely understandable if Activision and Toys For Bob wanted to limit the amount of physical toys that people needed to carry around with them to support the game, but at the moment, we just don’t know if the game supports those toys (traps) or not.