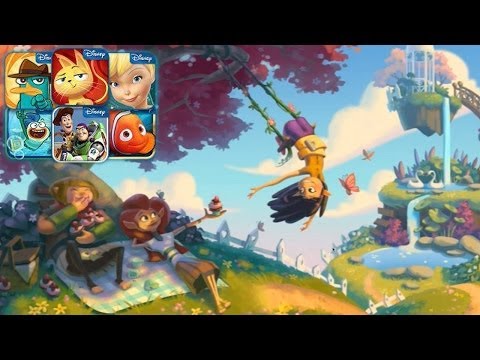 Disney Interactive apps on iOS and Android are celebrating Valentines Day with some added content and bonuses arriving in updates over the coming days.

Frozen Free Fall, a match three game styled after the smash hit movie will be lavishing 40% more hearts onto it’s players to keep them warm through these cold winter nights.

Disney Hidden Worlds, a hidden object game, celebrates Valentines by introducing a new Love Island area to search through; based around classic love scenes from those Disney classics we all know and love. Get searching before February 18th and you can also grab 5 extra gems to help you on your way!

Nemo’s Reef, a reef building game, might not be the most obvious choice for a love tie-in, but players can expect to find some exclusive pink plants and fish with which to adorn their reef along with a 75% Family Pack bonuses.

Words of Wonder, Disney’s magical word game, is giving fans a special boost bundle to help them on their way this Valentines. This will include three Hammer Boosts, three “Add 3 Moves” Boosts, and three Expanded Explosion Boosts!

Marvel: Avengers Alliance might be a game all about good vs evil, but even superheroes fall in love. Over the Valentine’s period you’ll be able to pick up romantically linked superheroes at a discount to help build up your squad.

Official Blurb: “In celebration of Valentine’s Day, Disney Interactive has updated several games with new content and promotional items and prices. This season, Google Play fans also get some additional love from the game teams:

Disney Hidden Worlds: Celebrate Valentine’s Day with a brand new themed “Kingdom” called Love Island, which features classic Love Scenes from Disney movies. Also, exclusively for Google Play, every new player that downloads the game from February 11 – 18 will get 5 extra gems when they begin their adventure!

Frozen Free Fall: Special for Valentine’s Day, Google Play fans will get a warm treat with 40% more hearts for free.

Words of Wonder: Exclusively for Google Play, fans of Words of Wonder will receive the Boost bundle including three Hammer Boosts, three “Add 3 Moves” Boosts, and three Expanded Explosion Boosts to help the adventure through the storybook world!

Marvel: Avengers Alliance Android players will feel the power of love this Valentine’s Day with new super duo discounts. Each day starting February 11th a different pair of romantically linked heroes will both be on sale in-game.”