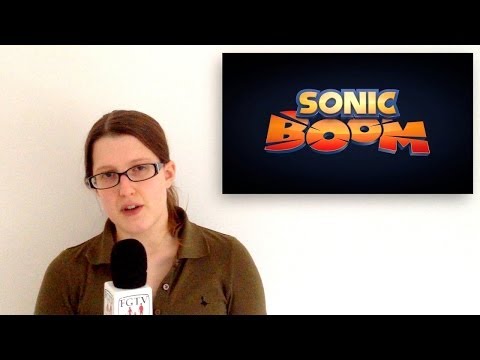 Our weekly look at the video-game news, releases and charts that matter for families. News anchor Webber sifts through the noise each week to help you make sense of what’s happening in our wonderful world of gaming.

Sega has announced a new Sonic game called Sonic Boom to be released alongside a new animated TV series, and a series of toys, of the same name.


In similar news, Ubisoft is partnering with Sony Pictures to make a film based on the Rabbids, which have already appeared in a TV series and several games, as well as having merchandise of their own. While the TV series is animated, however, Ubisoft has mentioned Sony’s experience making “hybrid live-action-and-animated blockbusters”, so the movie may take a different format.

Flappy Bird, the latest mobile game craze that has been downloaded millions of times, is no longer available to download. The developer said on Twitter, “I cannot take this anymore.” It doesn’t seem to be anything to do with legal issues to do with the Mario-like assets in the game, as Nintendo has denied that they’ve made any complaint.

Pokemon Bank, a 3DS app that lets you store your Pokemon on the Internet and transfer them between games with the Poke Transporter, is now available in the UK on the Nintendo eShop. Until March 14th, you can also get a pass that lets you use the app for free for 30 days (it’ll cost £4.49 a year after that). If you use the Pokemon Bank before the end of September, you’ll also get a free Celebi.

As Andy reported in a video a few days ago, some Skylanders are having their prices cut. Whether this is because Swap Force is trying to catch up with Disney Infinity or because a new game will be announced at the New York Toy Fair next week, we don’t know, but cheaper figurines are better news for all collectors.

Someone on the Skylanders forums has spotted preorders on Best Buy for “springtime” versions of several Skylanders that come in egg-shaped packaging: Trigger Happy, Punk Shock, and Fryno. They’re due on April 6th, two weeks before Easter.
http://forum.darkspyro.net/spyro/viewposts.php?topic=98194

The Sorcerer’s Apprentice Mickey figure that has only so far been available in the States to those who went to the D23 Expo last year was released last Sunday and is available from retailers like Amazon. We have one to give away; to enter, comment on this video, and follow us on Facebook and Twitter to find out who’s won.
http://www.facebook.com/familygamertelevision
http://www.twitter.com/familygamertv

The Minecraft Skin Studio App for iOS and Android now supports the new 64×64 pixel skin format for Minecraft on PC and Mac.
https://mojang.com/2014/02/skin-studio-has-been-updated/