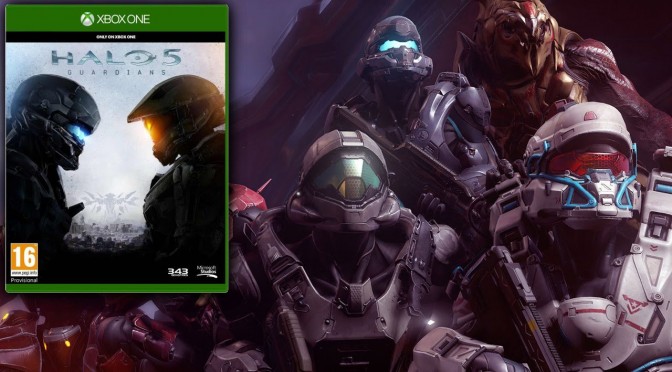 Halo 5: Guardians is a first-person shooter exclusive to the Xbox One, the latest in the popular Halo series that began on the original Xbox in 2001.

In the campaign players switch between series hero Master Chief and a new protagonist called Locke, accompanied by up to three human players or AI-controlled companions, travelling to different alien locations and defeating hordes of alien enemies.

Despite the campaign, the focus for a lot of people is on online multiplayer, with two additional modes that are new to this entry to the series.

Halo 5 is similar to recent games in the series.

In Guardians, Master Chief and the Blue Team disappear and the United Nations Space Command sends out new protagonist Locke and Fireteam Osiris to track them down. Players play as both Master Chief and Locke along the way.

Although the series was originally developed by Bungie, the franchise passed to Microsoft developer 343 Industries when they parted company before Halo 4. 343 has also worked on remakes like Combat Evolved Anniversary and The Master Chief Collection.

Halo 5: Guardians is only available for Xbox One, for £45/$60. You need a subscription to Xbox Live Gold to play multiplayer, which costs £40/$60 for a year.

It takes 8-12 hours to finish the campaign.

There are multiple difficulty levels from which to choose, and players spend many hours honing their skills for online competitive play.

In the UK and Europe, PEGI rates Halo 5: Guardians as only appropriate for those aged 16 and older for “realistic looking violence”.
http://www.pegi.info/en/index/global_id/505/?searchString=halo+5&agecategories=&genre=&organisations=&platforms=&countries=&submit=Search#searchresults

The GRA expands on its PEGI rating, explaining that while “the majority of the campaign is concerned with dispatching enemy alien characters”, “human characters can also be attacked with melee weapons, explosives and various firearms”. In multiplayer, for instance, “players can assassinate heavily armoured human characters by jumping on their back and twisting their neck, with a breaking sound”. Sometimes there’s blood, and some guns “blow your enemies up into glowing parts which disintegrate”.
http://gamesratingauthority.org/GRA/

In the US, the ESRB rates Halo 5: Guardians T for Teen (http://www.esrb.org/ratings/ratings_guide.jsp), with content descriptors for blood, mild language, and violence. It also notes that online features “may expose players to unrated user-generated content”. Mild language includes the word “ass” and insults like “I have copulated […] with your genetic progenitors”.
http://www.esrb.org/ratings/Synopsis.aspx?logoonly=1&Certificate=34053&Title=Halo%205%3A%20Guardians

Halo 5: Guardians sees Master Chief dealing with the aftermath of the events of Halo 4 and the loss he has suffered.

Throughout the series runs the theme of individual heroism and the hope pinned, often questionably, on these iconic characters.

People enjoy the Halo games for the feel of the combat, whether that’s the guns or the melee attack, fighting against alien enemies that require different tactics to defeat. Since Halo 2, these games have been popular for their online multiplayer modes, including the ability to play cooperatively with friends, and Halo 5 is likely to continue that tradition.