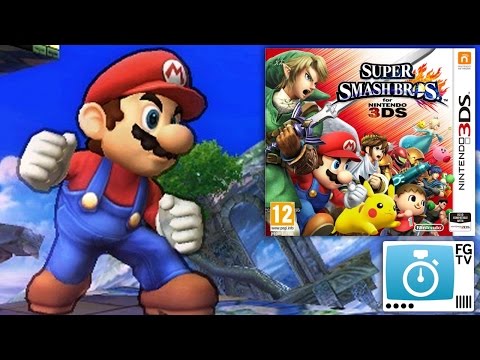 Everything families need to know about Super Smash Bros. 3DS. What’s great about the game to what to watch out for here’s our 2-min guide:

1. Genre and story:
The Super Smash Bros. games are fighting games in which you can play as a range of characters from other Nintendo titles such as Mario and Zelda.

New features in the 3DS and Wii U versions of the game include the ability to use Miis to fight, and compatibility with Nintendo’s new Skylanders-style Amiibo figurines.

These toy figures work like Skylanders but are Nintendo characters that players can bring into the game to fight alongside them rather than to control themselves. The Wii U Game Pad has built-in technology for these figures but current 3DS consoles require an additional peripheral.

2. Developer:
Super Smash Bros. for Nintendo 3DS and for Wii U were both developed by a collaboration between Sora Ltd. and Bandai Namco Games.

3. Format:
Super Smash Bros. for Nintendo 3DS is similar to Super Smash Bros. for Wii U, but the 3DS version has lower-definition graphics and optional 3D. Each version has exclusive content like stages and trophies. The 3DS version also has an exclusive mode called Smash Run in which players get five minutes to run around a level collecting power-ups before taking those power-ups into battle.

Multiplayer only works if players have the same version of the game, so Wii U players will not be able to fight against those on the 3DS. However, those who own the 3DS version can use their 3DS as an additional controller when playing the Wii U version.

4. Cost:
You can buy a digital copy of Super Smash Bros. for Nintendo 3DS for £39.99/$39.99 on the eShop accessible on your 3DS, which also offers a free demo so that you can try before you buy.

5. Length:
Though they do feature single-player modes, Super Smash Bros. games aren’t designed to be completed but are more like party games, with multiplayer for up to four players locally or online.

6. UK and Europe – PEGI:
In the UK and Europe, PEGI (http://www.pegi.info/en/index/) rates Super Smash Bros. for 3DS as only appropriate for those aged 12 and older, with content descriptors for Violence and Online play.

The Games Rating Authority (http://gamesratingauthority.org/pegi/search_aci.html) expands on its PEGI rating by describing the kinds of violence players can carry out – “kicks, punches and the use of some weapons” – though it does emphasise that “there is no blood or visible injury”. The concern with online play is that it “may involve real-time interaction with other players”, which some parents might not want for younger children.

7. US – ESRB:
In the US, the ESRB (http://www.esrb.org/ratings/synopsis.jsp?Certificate=33546&Title=Super%20Smash%20Bros.) rates Super Smash Bros. for Nintendo 3DS as E for Everyone 10+, that is “generally suitable for ages 10 and up”, with content descriptors for Cartoon Violence, Comic Mischief, and Mild Suggestive Themes. The description covers the different kinds of attacks – “players punch, kick, and use special attacks/power-ups” – but emphasises that battles are “cartoony”, though accompanied by “mild explosions” and “cries of pain”.

8. Common Sense Media:
Common Sense Media (https://www.commonsensemedia.org/) gives Super Smash Bros. For 3DS a target age of 11+, stating that “generally friendly characters – such as Mario, Yoshi, and Pac-Man – beat, stomp, and attack each other in an over-the-top, cartoonish free for all”, though they also point out that there’s “no blood or gore”. Common Sense Media also warns that it’s “possible to play against strangers from around the world”, though the game is most fun with friends and will keep players “occupied for a very long time”.

9. Themes:
As with any competitive game, younger players may get frustrated if they lose, especially because the controls are simple but allow for greater strategy for those who’ve had lots of practice. Parents should be wary of the battle mentality seeping into real life if siblings become frustrated with one another.

10. Why people play:
Super Smash Bros. is not the best fighting game available, but it’s not meant to be. It’s an easy-to-pick-up party game for those who love Nintendo and playing with friends, particularly if those friends are in the same room.

The 3DS version in particular may appeal to those who want to be able to practice with the single-player mode out and about, or who are more likely to be able to play their 3DS than get access to a TV. It might not be as high-definition as the Wii U version, but it still has all the best features, including the ability to play both online and locally with friends.