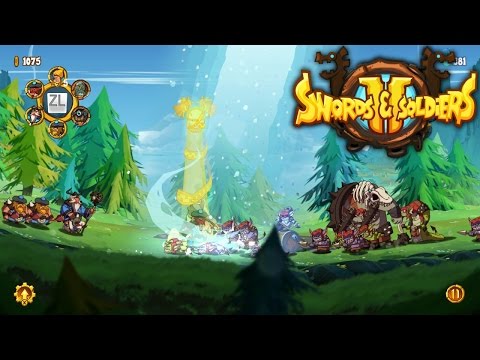 Swords & Soldiers 2 (Wii U) has a colourful style – both in its high-definition hand-painted visuals and in its humour – that suggests simplicity, but look closer and there are more complicated systems at play. This is a real-time strategy (RTS) game, which means you have resource management and multiple units to contend with all while your enemy is coming at you.

In Swords & Soldiers 2 those units come in three different types or “factions”: vikings, demons (goblin-like creatures), and a third currently unannounced. Each faction has different units with different abilities, and each level gives you a different tech tree with which to unlock them one by one. At the start of the level you’ll send out your resource gatherers, e.g. the women with Scottish accents for the vikings, to collect gold, and then you’ll use that gold to unlock units and spells. The units might be fighters with melee or ranged attacks. The spells range from healing spells to lightning strikes.

Of course, unlike many other strategy games this one takes place on a side-scrolling 2D plane. Whether you play against a friend or the game, your faction and the enemy’s will start at opposite ends of the map, with the goal to make it to them and destroy their base before they can do the same to you. The neat thing about the local multiplayer is that you don’t even need to split the screen in half; since this is the Wii U, one of you can use the TV while the other uses the GamePad.

In general, the Wii U seems like a great home for this game. The GamePad has that touch screen to allow for the more precise point-and-click controls RTS players prefer (which is why so many of those games are PC only), even in these simplified level layouts. Units are summoned with ZL, spells with ZR, with a wheel around each icon on the screen showing you what you’ve got to choose from.

Those simple controls and the cartoonish humour both make Swords & Soldiers 2 a great RTS for beginners, maybe for younger players, though the combat – even if bloodless – might be a bit much for the very young. Maybe it’ll be a gateway for players to then move onto more complex examples, or maybe they’ll stick with this one for the intense multiplayer, which is clearly the main draw even if this does feature a story campaign.

We don’t have a release date for Swords & Soldiers 2, but hopefully it’ll come to the eShop soon. The Wii U could do with more fun little games like this.

Swords & Soldiers II is published and developed by Ronimo Games for the Wii U. It offers a 1 person Campaign mode and 1-2 person Skirmish mode. It is planned for release late 2014.

It offers a side scrolling strategy game with 3 factions and 20 Story missions.

Swords & Soldiers II is the sequel to the award winning WiiWare game Swords & Soldiers, released in 2009 by Ronimo Games. Like its predecessor, the game is a side scrolling strategy game. It allows players to buy units, cast spells and build structures to overwhelm their enemy on a 2D battleground.

The Vikings make their return from the original game, once again led by their ever-hungry chieftain Redbeard. But this time they face two new enemy factions, the brutal and manaical Demons, and another as-of-yet unannounced faction. Joined by likely and unlikely allies it’s up to Redbeard to root out these new threats and restore peace to the lands.