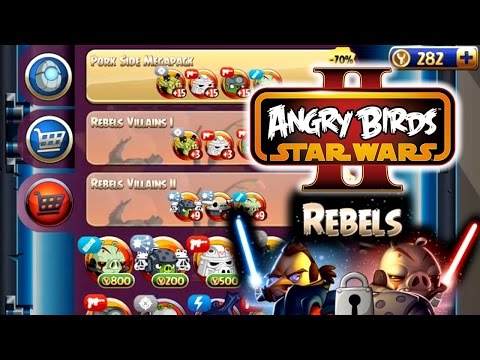 With the recent pilot of the new Star Wars animated TV show Star Wars Rebels airing on October 3rd worldwide, it was only fitting that Rovio paid tribute to the show with some additional levels and new telepods modeled on the show’s heroes and villains. The series is set 14 years after Star Wars Episode III: Revenge of the Sith and 5 years before Star Wars Episode IV: A New Hope and features a ragtag group of Rebels who bump up against a Galactic Empire that are desperately seeking out the last of the Jedi in order to put an end to them once and for all.

The update for Angry Birds Star Wars 2 features six new characters representing the heroes from Star Wars Rebels, Ezra, Kanan, Sabine, Garazeb, Chopper and Hera; and six new villains, The Inquisitor, Agent Kallus, Imperial Officer, AT-DP Pilot, Chikatro Vizago and a Vizago Droid pig. Each of the new characters is available in a single telepods multipack and all have distinct abilities within the game. In this first video we’ll focus on a few of our heroes as we get to try out Ezra, Sabine and Hera. Ezra has a powerful blaster that can shoot through certain materials, Sabine bounces around the environment dropping thermal detonators and Hera can plant sentry guns which will detect any pig within a line of sight and take them out.