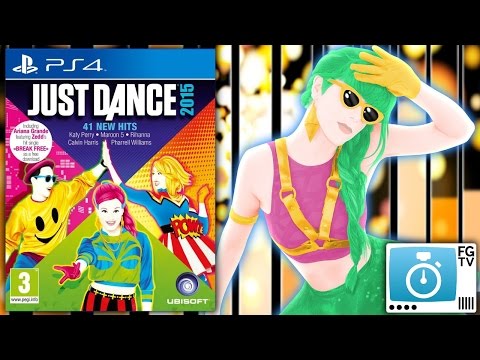 Our 2 minute guide for parents on Just Dance 2015.
1. Genre and story:
Just Dance 2015 is the sixth game in the popular series of dancing games, the first of which came out for Wii in 2009. That version used a Wii Remote to judge the dancing, but newer versions use different control schemes.

Just Dance 2015 consists of a collection of songs with routines attached. Players mimic a dancer on screen as if the dancer was their mirror image, with the next moves appearing along the bottom of the screen. Players receive a rating for each move, like OK, Good, or Perfect, and then a score at the end.

Just Dance 2015 can track multiple players at once, up to six on the Xbox versions and up to four on the others. Some songs have group routines that give different players different moves. You can also play online, trying to beat the scores of others.

New to Just Dance 2015 is a mode called Community Remix, in which rather than the usual dancers on screen the song plays footage shared by Just Dance players via the Kinect or PlayStation Eye camera.

2. Developer:
The Just Dance series is developed by Ubisoft, whose catalogue of games features a wide range from Rayman to Assassin’s Creed.

3. Format:
Just Dance 2015 is available for Xbox One, PlayStation 4, Wii U, Xbox 360, PlayStation 3, and Wii. Xbox One and 360 versions use just the Kinect camera. The PlayStation 4 version uses the PlayStation Eye, or you can play with the camera and Move controllers, which is also how you play on PS3. You can also connect a smartphone and use that as a controller. The Wii U and Wii versions require Wii Remotes, but you can use the Wii U GamePad to record yourself.

A smartphone version of the game called Just Dance Now allows players to play without a console, by syncing up their phones with an Internet-connected screen.

5. Duration:
Just Dance 2015 doesn’t have a story so there’s no real end, though you do unlock additional content – like extra songs and routines – the more you play. Even if you get five-star ratings on all of the available songs there are more to buy as downloadable content.

6. UK and Europe – PEGI rating and additional consumer information:
In the UK and Europe, PEGI rates Just Dance 2015 as 3+, “suitable for all persons”, though does point out that the game “allows the player to interact with other players online”.

7. US – ESRB:
In the US, the ESRB rates Just Dance 2015 as E for Everyone 10+, with a content descriptor for Lyrics and two warnings for online, that is that it “includes online features that may expose players to unrated user-generated content”, which presumably refers to players’ ability to use a photo as the avatar that represents them online.

The description highlights some of the potentially problematic lyrics, e.g. references to alcohol and “suggestive material”: “So let me get you/In your birthday suit”; “Now there’s a backseat lover/That’s always under cover”; and “School girl sleazy”.

8. Common Sense Media:
Common Sense Media recommends Just Dance 2015 for those aged 10 and older, stating that the game “heavily promotes having fun with other players by dancing in groups, as well as getting exercise by moving your body in time to the music.” The description also mentions the lyrics, saying that some “have references (usually mild) to sex and alcohol”. As for online play, “players can dance with friends or strangers online, but there’s no communication available between dancers”.
https://www.commonsensemedia.org/game-reviews/just-dance-2015

9. Themes:
The fact that the dancers are represented by colourful silhouettes takes the emphasis away from the physicality of those on screen compared to the actual music videos for the songs. Parents who worry about how, for example, female performers are portrayed should have less to worry about here.

10. Why people play:
Unlike some other dancing games that are available, Just Dance 2015 isn’t focused on dancing skill as much as it is on just having fun. The game is pretty forgiving, so is better suited than the more serious dancing games for playing with people who’ve never played it before.

The ability for the game to track up to four or six players depending on the version makes it a great game for party type situations and for families to play together, especially those versions that use a camera peripheral and thus don’t require additional controller purchases. The songs are mostly pop, so should appeal to a wide range of people.