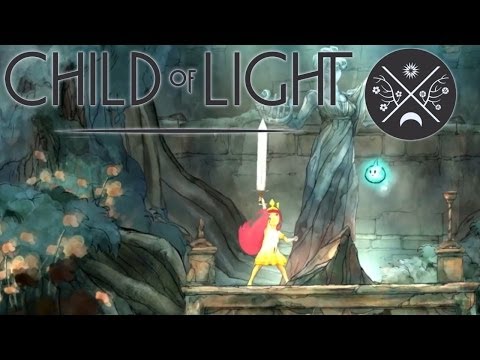 Having had some time to look at the game, here are my four favorite things about Child of Light:

Lemuria: The world of Lemuria, in which you play is both enchanting and dark. Although not as restrained a pallet as Limbo this certainly draws from its art style, along with games like Vagrant Story and Final Fantasy VIII. Fireflies dance in the foreground as leaves blow through the trees behind. It’s an eerie empty space, but one that was obviously inhabited not long ago with ruins, fences, ethereal flying fish and broken statues guarding every turn. It’s all rendered with the UbiArt Framework used to make Rayman Origins & Legends.

Aurora: You play Aurora, a girl from 1895 Austria who falls ill but instead of dying she falls asleep and wakes up in the mythical world of Lemuria which has had its sun, moon and stars stolen by the Black Queen. She seems to be about ten years old and brings with her a fragility and bravery. She is upset at the loss of her father, but resolves to rescue him and restore the celestial bodies. But unlike her male counterparts she is a protagonist without the strength to do this alone, struggling to even lift her sword. As the developers put it “An active heroine, no prince charming at the end, focused on the idea that we need to grow up, leave home and take responsibility to make a change in the world.”

Game-Play: The game moves from side scrolling platforming into battle encounters. Here we find a system much like the Active Time Battle systems of games like Final Fantasy and Grandia, but in stylized and beautiful form. Players must draw on their party and choose between attack or defense in a limited time. Act quickly and you can interrupt enemy attacks to gain the upper hand. There is complexity and depth here but this is handled sensibly so as to not be off putting to new comers to the genre while drawing on the team’s experience with upgrade skill trees from games like Far Cry 3.

Game-play is extended considerably when a second player takes control of Igniculus. This works because Aurora and Igniculus offer substantially different play patterns. Aurora offers standard JRPG fare (physical attacks, magic and targeting one or more enemies) while Igniculus has a more tactical bent (blinding enemies or interrupting them in the middle of an attack) as well as collecting health and magic from the battle and heal other party members. Other interesting game-play touches include being able to leave messages behind for other players, much like Dark Souls allowed players to do. This not only provides a novel way to communicate with other people but also lends a sense of community to Lemuria.

Story Telling: The experience is then tied together with fairy tale prose in the form of rhyming couplets (“Will someone please explain, how water falls with no rain”). It’s a risky approach to story telling as there is a danger here of it feeling twee and too cute. However the balance seems good in the sections I’ve played. The story happily continues through the game with speech bubbles popping up during play, as well as the hand draw cut scenes. The result is an Elizabethan theatrical feel to the writing that plays to the fairytale castle visuals. As Jeffrey Yohalem, script writer, puts it “Because the text in the game is largely written, not spoken, my goal is to pack as much meaning into as few words as possible. Much of the story is told through gameplay, the story’s evolution is tightly linked with Aurora’s evolution.”