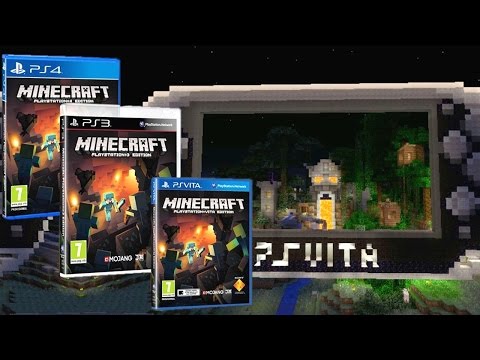 We finally have a release date for Minecraft for PlayStation Vita. 4J Studios, the development team that works on the console versions of Minecraft, has just tweeted that Minecraft PS Vita has passed the final test and will be released on the 15th October in Europe.

It seems those of you in North America will have to wait for more news, as 4J Studios then tweeted that they don’t have a confirmed date for North America. They added that they’ll hopefully hear soon, but given that the 15th is not that far away it seems Europe might get the game first.

Along with the news, 4J Studios also tweeted a link to an impressive new trailer for this version of the game, in which we’re taken on a long mine cart ride around a cleverly crafted world. The world we’re taken through seems so expansive that it almost makes you wonder if this trailer was made in the Vita version of the game at all. Look at how far in the distance you can see in the more open spaces and let us know in the comments if you think that matches what you know about the draw distance the game has on the Vita.

Those of you who are in Europe and will be looking to get Minecraft for PlayStation Vita, remember that through Cross Buy if you’ve already bought the PlayStation 3 version you’ll get the Vita version for free. Saves are also transferable between the PS3 and Vita versions. If you have a PS4, you can pay a small fee to upgrade to get the PS4 version too. You can import your PS3 and Vita saves to the PS4 version but won’t be able to transfer them back.

Will you be getting Minecraft for PlayStation Vita when it comes out next week? Let us know in the comments.