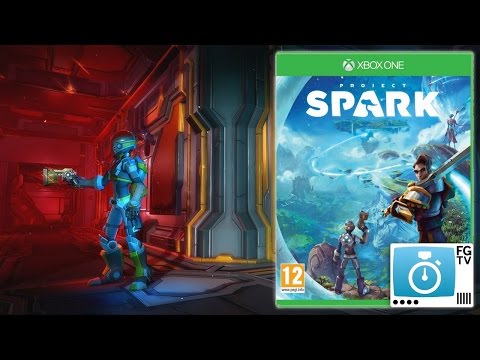 Everything you need to know about Project Spark in 2 minutes:

1. Genre and story:
Project Spark is a free-to-play set of creation tools from Microsoft that enables people to make their own games. It is based on Kodu Game Lab, which teaches the principles of programming with a simple visual programming language. Players can sculpt levels and fill them with characters and objects, and then program behaviours into them.It sounds complicated but is made accessible through the Champions Quest tutorial, player support, and an intuitive interface.

Players can collaborate to create levels on the same screen, perhaps with one sculpting the environment while another runs over it with a themed “paint brush”.

2. Developer:
Team Dakota, a team made up of both industry veterans and new developers, was created solely to make Project Spark. The team has a close relationship with the community of creators, using the beta to find out what players want.

You can play Project Spark with an Xbox One controller, mouse and keyboard, touch controls on your Windows 8 device or through SmartGlass, or even use Kinect to control your characters’ voices and motion. Anything you make on one platform is also accessible on the other.

The physical Xbox One version of Project Spark, called the Starter Pack, costs around £30/$40 but contains content worth about twice that. It includes an episode of Champions Quest called Void Storm, a bunch of content you can use to create your own levels, and a month of Project Spark Premium membership, which makes you earn credits twice as fast.

5. Length:
Project Spark doesn’t have an end. Even Champions Quest will continue to receive additional episodes.

6. UK and Europe – PEGI rating:
In the UK and Europe, PEGI (http://www.pegi.info/en/index/global_id/505/?searchString=project+spark) rates Project Spark as only appropriate for those aged 12 and older with a content descriptor for violence.

The Games Rating Authority (http://gamesratingauthority.org/pegi/search_aci.html) expands on the PEGI rating by explaining that the game “contains frequent moderate violence towards human characters”, with the use of “fantasy weapons, swords, axes, explosives which can cause the death of a character”, though points out that “the result of the violence is non-realistic as when hit they flash red and disappear in a cloud of smoke”. The Games Rating Authority also mentions that Project Spark “features online playing capability which may involve real-time interaction with other players”.

7. US – ESRB:
In the US, the ESRB (http://www.esrb.org/ratings/synopsis.jsp?Certificate=33425&Title=Project%20Spark) rates Project Spark as E for Everyone 10+, with one content descriptor for Fantasy Violence, which it expands upon in the description: “Players use swords, axes, and bows to defeat enemies; battles are accompanied by sword slashes and colorful light effects. Enemies disappear amid coins and smoke-like effects.”

8. Common Sense Media:
Common Sense Media (https://www.commonsensemedia.org/) recommends Project Spark for those aged 10 and older. It describes it as “super educational – especially if kids are into programming/design”, but warns that there is “some mild cartoon shooting/punching/magic against humans”.

9. Themes:
A lot of the content for Project Spark so far is based around fantasy adventures, which will include fighting creatures like goblins. Parents should note that players can create and share whatever the tools and their imagination allow. The Terms of Service forbid inappropriate content and the team will take action if they come across any, but some might slip through the net. Ideally parents and younger children should play Project Spark together.

Parents should also be aware of the payment model for additional content, since it can be bought with either credits earned through completing challenges or with real money.

10. Why people play:
More and more games these days revolve around this idea of user creation, from LittleBigPlanet’s level creator to Disney Infinity’s Toy Box to Minecraft. Project Spark gets closer to actual programming, using its visual language to lay the foundations that players may well build upon by learning a text-based programming language later on. Thanks to its simplicity, millions of people will be able to use Project Spark to start learning about game design and get their ideas out into the world, which is something to be celebrated.