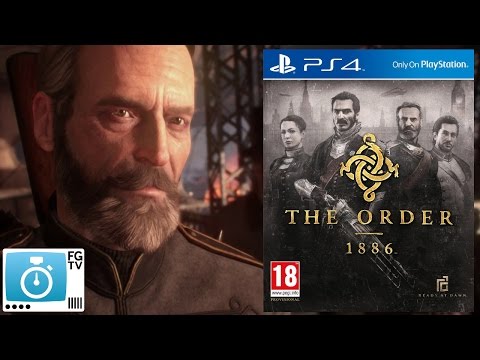 Parent’s guide to The Order 1886, from what’s great to what to watch out for here’s our ultimate 3 minute guide.

The Order 1886 is an action adventure game played in third person perspective in which you play a member of an order descended from the Knights of the Round Table, fighting beast people and human revolutionaries in an alternative Victorian era.

The game has stealth sections where you must eliminate enemies without being seen, as well as shootouts in open areas allowing for plenty of different strategies.

The game is single player only, the player taking the role of Grayson, fourth bearer of the name of Sir Galahad and a loyal member of the Order.

The third person perspective shooting and use of cover is similar to the Gears of War and Uncharted series, while the more agile action sequences are reminiscent of Uncharted in their blockbuster scale.

2. Story
In the Order’s alternate history beast men have plagued the Earth since the time of King Arthur, and the heirs to the Knights of the Round Table have used the mysterious black water to combat this threat and extend their lives.

Galahad’s loyalties are challenged as a working class revolution threatens the aristocratic system the Order has so far supported, and Galahad is accused of a crime he didn’t commit.

3. Developer
The Order 1886 is a collaboration between developers SCE Santa Monica Studio and Ready at Dawn, both of whom have previously worked on Sony’s God of War series famous for its violent and epic action set pieces and boss battles featuring huge mythological creatures.

4. Format
The game is published by Sony and exclusive to PlayStation 4, costing £50 or $60.

5. Duration and Difficulty
The Order 1886 promises eight to ten hours of gameplay depending on ability. As a pure single player game there is no multiplayer mode to offer added value, but there are objects to discover.

6. UK Rating
In the UK and Europe, PEGI rates the Order 1886 as 18 for “frequent strong violence towards human characters, the use of sexual expletives and depiction of sexual acts with visible sexual organs.”
http://www.pegi.info/en/index/global_id/505/?searchString=The+Order+1886

The Games Rating Authority expand on their PEGI details by saying that the game features scenes of torture, hand-to-hand combat and the deliberate breaking of bones during combat, and that ‘the use of grenades and explosive projectiles can cause mutilation and dismemberment’. In one scene there is a ‘frenzied knife attack’ where one character is stabbed in the neck and there are ‘lots of blood and gurgling noises as the knife is plunged in and out of the neck.’ There’s also a scene where a werewolf character chews on the neck of a dead human, complete with sound effects, and a sex scene as well as sexual swearing throughout.
http://gamesratingauthority.org/pegi/search_aci.html

7. Other Ratings
In the US the ESRB rates the Order 1886 M for Mature with descriptors for blood and gore, intense violence, nudity, sexual content, and strong language. The ESRB goes on to state that the player uses ‘pistols, rifles, grenades and fantastical weapons […] to kill human enemies and Lycan (i.e. werewolves).’ The ESRB highlight that stealth kills involve slitting throats, that explosions cause dismemberment and mutilation, and that a brothel scene features nudity and sexual scenes.
http://www.esrb.org/ratings/synopsis.jsp?Certificate=33779&Title=The%20Order%3A%201886

8. Themes
The idea of a steampunk alternative Victorian era might suggest top hats with brass cogs glued to the side, but The Order 1886 is going for something much more brutal, like a version of Ripper Street where Jerome Flynn blasts werewolves to pieces with huge sci fi guns.

The soldier finding his loyalty to his order challenged is a thriller standard, and a staid society challenged by proletarian revolt provides a broader political context for the fantasy that creates a tension between the player character’s role as a member of an elite fighting squad and a broader sense of social justice that’s a little more grey and nuanced than the usual heroic soldiers fighting an implacably evil enemy.

9. Why people play:
The Order 1886 certainly has big ambitions, aiming to be a new blockbuster exclusive series for Sony to match Uncharted, and to set standards for production gloss on PS4. Punches are not being pulled here, with bombastic violence, constant swearing and some sexual content, with the political themes providing some depth beneath the explosions.

A combination of hand-to-hand combat, shooting with spectacular fantastical weapons and the occasional stealth section provides variety, adding up to a game that aims to rival Nathan Drake’s adventures for constant action and massive set-pieces.