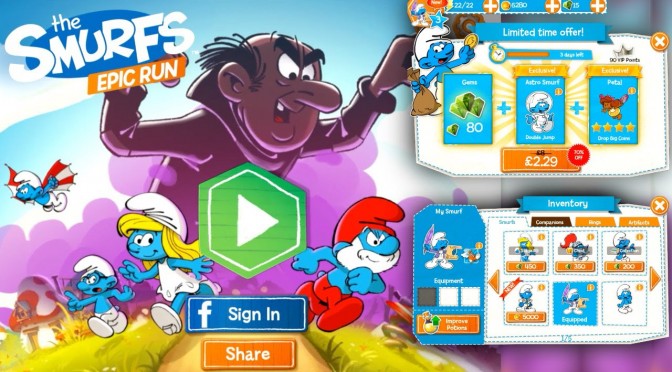 The Smurfs Epic Run, the latest auto-runner style game to land on the app-store comes loaded with more charm than most and a whole host of little blue blighters to collect. The evil wizard Gargamel has cast an evil fog spell to capture all the Smurfs and with the whole village gone, you’re the only Smurf left! Run away from the fog and become the true epic hero of the village!

In order to survive you’ll need to free a whole bevy of Smurf friends, who all come with their own special powers. You’ll also gather powerful magic artifacts along the way to help you and of course as this is a free game, it comes with the odd smattering of in-app purchases to speed your progress.

Thankfully, like a number of games targeting the younger end of the market, Smurf’s Epic Run avoids having the highest possible level of IAP (£79.99), settling for a slightly less eye watering £39.99 maximum transaction. Coins and Gems can be bought in various smaller quantities and those will help you unlock Smurf’s faster or refill your energy meter, but parents should keep a close eye on any transactions!