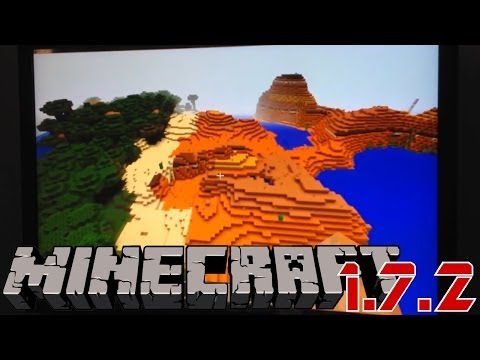 Official Spiel:
“It feels like we’ve been working on this for a year now, with more than half a million lines of code changed over 1,104 commits we’ve been working extremely hard on this update. We’re calling this one “The update that changed the world”, because it really has in two different ways; there’s over twice the amount of ingame biomes, and we’ve overhauled lots of the code preparing for the plugin API.”

New world generation!
– Double the amount of biomes, with new trees/flowers/blocks.
– New “Amplified” world option.
– Less ocean, more awesome.
New blocks!
– Two new types of wood.
– Stained glass! With both blocks and panes.
– Packed ice, red sand, podzol.
– Lots of new flowers, including double-tall versions of current plants.
– Portals can be bigger sizes!
Fishing!
– Added more type of fish.
– Redone the fishing mechanics. Can now catch junk and treasure too.
– Fishing rod enchantments!
Maps!
– Put them in an item frame and hang them on your wall. They’re extra big!
– Lots of new colours for lots of blocks!
– Now with less lag!
Achievement & Statistics overhaul!
– Now both world (or server) specific.
– In multi-player, it’s announced to everybody when you get an achievement.
– You can move your mouse over this in the chat to see what it was!
– Some new achievements and statistic types were added.
– Zoomable achievements screen!
Multiplayer enhancements!
– Servers can now put a 64×64 image called “server-icon.png” in their folder, that you will see on your server list.
– You can see who’s online before joining a server; move your mouse over the player count!
– Lots of hidden preparation for allowing name changes.
Resource pack changes!
– You can now have multiple selected.
– They can completely re-do your sounds, adding new ones or changing current ones.
– Servers can now recommend a resource pack for you to use.
Chat & command improvements!
– New commands to spawn mobs or blocks of any type.
– Command block minecart!
– Clickable links to achievements and items.
– Click on somebody’s name in the chat to message them!