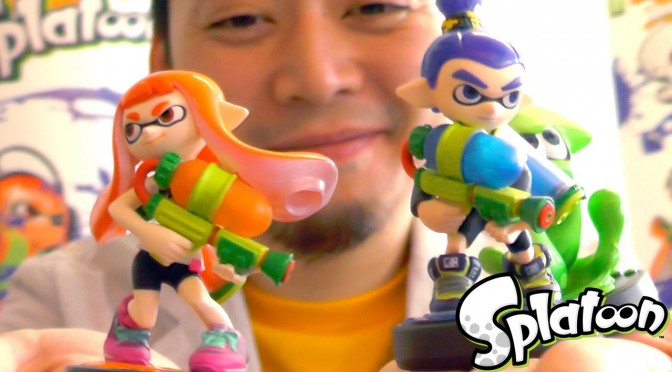 Kids interview the man behind Splatoon and get some really interesting answers.

Q. Why does the other team’s paint slow you down but yours doesn’t?
A. I’m sure you will be able to swim fast in a pool, but in a pool of oil you won’t be able to swim so fast. We think that it’s quite similar to that.

Q. Why does the hair look like squid legs?
A. Did you know that squid have ten legs. The inklings as well they have their arms and their legs which make up four then they have their hair make up another two, then the remaining four are hidden at the back of their head. Their ten squid legs exist on their body. It looks like they have hair but this is actually squid legs.

Q. Why is there a big fat cat waving a flag at the end of a level?
A. Have you ever noticed Judds outfit before. He looks very similar to a referee in a boxing match. The reason why the Judd is Judging the winner is because of his keen eye to instantly determine who has coloured in the most. Why is there just one cat in the world of Splatoon? The clue is hidden in the sunken scrolls.

Q. Which is the best weapon in splatoon.
A. There’s no strongest weapon in SPlatoon, all weapons have their strengths and their weaknesses. I hope you get better at Splatoon and find the weapon that you like.

Q. Could we play with two Gamepads on split screen if we had them?
A. Sorry unfortunately you can’t do that.

Q. Are you going to do any more amiibos, maybe with clothes they can wear?
A. I think being able to give amiibo clothes is a great idea. It would be difficult to do that, but maybe you could make some sun glasses, hats and clothes to put not he existing amiibo.