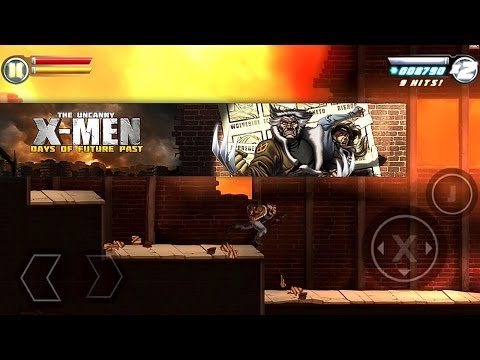 Uncanny X-Men: Days of Future Past let’s you battle as as five members of the Super-mutant team to prevent a dystopian future that is ruled of by gigantic machines. It’s a storyline that splits action between past and future, allowing for a huge range of backgrounds to enjoy in the games comic visual style.

While clearly tied to the new X-Men movie, Days of Future Past, this new title from Glitch Soft draws more of its aesthetic influence from the 1981 comic storyline.

Here we play as kitty pryde, Wolverine, and Colossos through three early stages of the game. With 21 levels to enjoy, a total of five playable characters (plus three more promised soon), and additional costumes to unlock, there is certainly plenary more to enjoy for X-Men fans.

Featuring 2D side scrolling action, the gameplay feels like an evolved version arcade classics like Shinobi or Ninja Gaiden. This is thanks to its RPG levelling system, and fantastic combat controls that utilise an ingenious virtual button/stick hybrid.