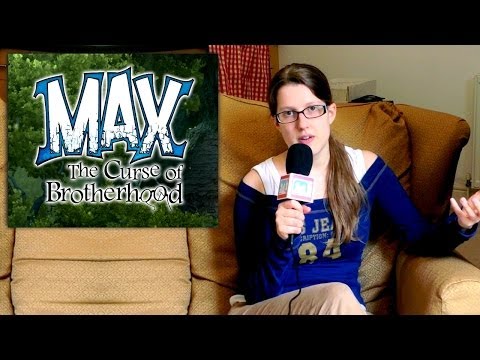 As an early title for the Xbox One, Max: The Curse of Brotherhood (PEGI 12) is a game that many might have missed, but now is a great time to check it out, because the new Games with Gold for Xbox One allows Xbox Live Gold subscribers to download the game for free. Families in particular should consider downloading the game while it’s available for free and giving it a try.

While colourful screenshots suggest suitability for younger players, they don’t really explain what the game is about. From its “2.5D” style (i.e. 2D gameplay in a world that looks 3D) you might guess that it’s a platformer, but what platforming you do is pretty simple, only becoming a challenge in miniature speed sections. The most interesting mechanic in the game has to do with Max’s magic marker, as previously seen in the 2010 game Max & the Magic Marker.

In Max: The Curse of Brotherhood, this magic marker can be used to draw environmental objects into existence, which you can then use to help Max get closer to his goal of rescuing his little brother, for instance by dragging a new platform up from the ground or attaching a vine to an overhanging branch. Progress through the game is clearly marked as you learn how to draw new objects at regular intervals throughout, and you’ll build up your skill at solving these environmental puzzles as you unlock more abilities. Because these are environmental puzzles, they rely on physics, e.g. the timing of a swinging vine, and that combined with having to use the analog stick on the Xbox One controller can make things quite fiddly. But solving the puzzles gives you a real sense of achievement, and there are regular checkpoints so while they require some thought they’re never frustrating.

That balanced difficulty level is one of the reasons I’d recommend this game to adolescent players looking for something that doesn’t baby them. The PEGI 12 category is sparse compared to other age ranges, so it’s always worth taking note when a game comes along that can satisfy that need for something more difficult without mature content. Max can die, in a dramatic cartoonish fashion, but there’s no blood or gore. The young protagonist is pretty convincing too, as he mutters things like “quit it” and “you guys are really stupid” at the monsters he comes across. The story isn’t particularly complex, but then it doesn’t need to be. The enjoyment comes from solving those puzzles and making it to the next area, and even when you’ve solved all the main ones there are plenty of collectables hidden away in the levels that provide a reason to go back. For anyone with kids in that difficult age bracket — too old for “kiddy” games but not quite teenagers yet — this is definitely worth a try, especially since it’s currently only £11.99 (or free with Games with Gold) on the Xbox store.