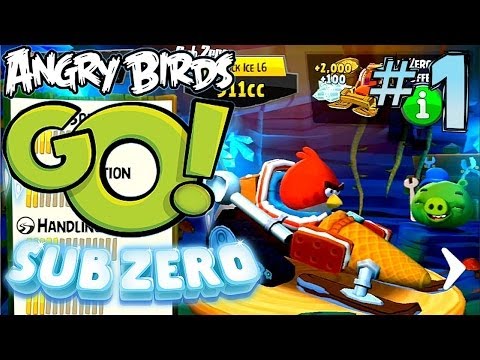 The Winter Olympics may have finished, but it’s time to go back to the slopes with Angry Birds Go! Sub Zero DLC. The first expansion for Angry Birds Go! adopts a wintery theme as you slip and slide your way down the slopes in a whole host of new karts. Although the new karts and telepods aren’t available in stores yet, you can get an early preview of how they drive with their virtual counterparts in the app. There are eight new karts to get your hands on, with a wide range of prices:
Tar Barreller
Slushy Slider
Snow Shoo
Shred Sled
Chuck Ice
Mr Plow
The Blue Cornett
Arctic Roller

New In-App Purchases. Rather than using real money to buy karts, they’re now purchasable via one of the in-game currencies, which is a change of tack from Rovio. Although those in-game currencies can be bought with real money, you can also earn them in game, by playing daily challenges or collecting them on the tracks. We’ll have a quick look at the pricing there before we dive into a daily challenge and then it’s onto the main event as we try and survive the brand new Sub Zero courses.

Check out our previous Angry Birds Go! videos where we look at all the toys and a variety of the tracks and karts in game.