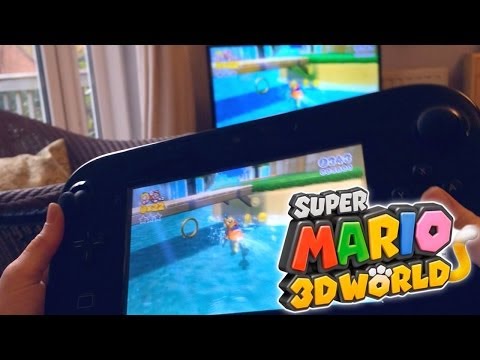 We have a close look at SUPER MARIO 3D WORLD on the Wii U, and how it works in a family.

It’s been a while since I first stepped into the world of 3D with Mario. Mario 64 seems like an age ago, my whole family of five has been created in the meantime. However, like any worthwhile creation, a multiplayer version of this three dimensional playspace was important to get right.

With more recent memories of Mario Galaxy and Super Mario 3D World on 3DS sparking in my head I sat my family down to try out the new four-player Wii U game for the first time. As anyone who has played video-games with a range of siblings knows this is not without its tensions, and before long my oldest was frustrated at being held back while my youngest kept complaining of getting left behind.

This is the real test for a family game, can it really accommodate these different abilities and ages? Although at first it seemed that Super Mario 3D World may be too frustrating for my children to play together, as time went by the complaining and squabbling subsided. They realised that working as a team was not only more effective but also more fun.

This is not happy coincident but part of the clever way the game handles its four person multiplayer feature. First of all it will catch up slower players by placing them in a bubble and floating them to the front — something my son really appreciated as this really takes the pressure off. Then there is the shared life system where players all draw on the same pool of lives — a great incentive for the party to look after novice members.

Finally there is the collaborative physics of carrying, jumping on and bumping each other to hard to reach places.

Add all this up and there is a steady trend towards collaboration rather than competition in the game, well at least until you get to the flagpole and race to the top.

The children enjoyed seeing the return of the Tanooki and Boomerang suits but king of the upgrades this time is the cat suit, or cat transformation to give it the proper name. Our own family feline was called upon more than once for tips on “being a cat” as my youngest put it — although without a huge amount of response.

Again this seemed to be a game full of giggles when the various power-ups were collected. The Double Cherry ability that duplicates the main character caused both confusion and laughter as the family tried to figure out how to progress. The kids also liked the “minecraft” blocks you could wear on your head. Like the coin box from New Super Mario Bros. on 3DS but here Light blocks defeat ghosts, Goomba masks let you sneak past Goombas and Cannon blocks let you fire cannon rounds.

As much as these innovations though it was the small design decisions that make a difference here. Being able to choose which of the Mario team you wanted to be (like in classic Super Mario Bros. 2) led to great deliberations on the sofa. But it was the balancing of these different characters that kept the children experimenting with Mario, Luigi, Peach and Toad for the duration. They even came up with their own nick names for them “all round” Mario (which I thought just meant he was plump but in fact was about his balanced abilities), “sky” Luigi (because of his jumping apparently), “floaty” Peach (for her ability to hang in the air) and “tode-bot” Toad (for being fastest on the ground).

Another little touch that we appreciated was collecting the different stamps hidden around the place, and then being able to use these in our Miiverse messages from the game. It was a subtle way of communicating how good you were at the game and ticked the sticker collection side of my offspring’s psyche.

Along with all the competition for power-ups, coins and getting to that flag first it was the collaboration of Super Mario 3D World that has cemented it as a family favourite. At first I thought they would simply end up killing each other, but on returning half an hour later an effective harmony had settled on the lounge (with just the odd bound of elbowing now and again).