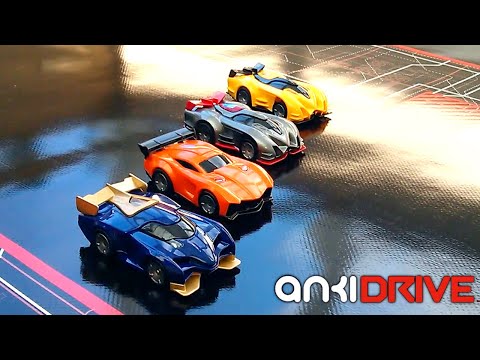 Anki DRIVE is a racing toy and game like no other. It may appear reminiscent of the Scalextric sets you had as a child and that you can still buy today, but Anki DRIVE feels very different, it feels like it’s from the future. Both are currently trying to find the right blend between old school physical racing sets and the digital gaming world in which many children spend a growing portion of their time, but while one still feels like it’s desperately trying to break free from the shackles of it’s past, the other is taking full use of the open road in front of it.

The cars and the track work seamlessly together, employing a number of sensors which allow them to happily drive around the track without a wrong turn or collision. These are intelligent cars and when combined with the Anki DRIVE app, create a unique experience. Various game modes allow you to race cars head to head or in teams, the cars themselves can be loaded up with virtual weapons and defenses that can be employed when you’re in sight of your opponent. Experience earned from races can be used to unlock and upgrade more and when deployed on the track, they have a physical impact that can slow down or stop your opponent dead in their tracks. It’s everything you did with your Hot Wheels cars in your head, made real (well virtually real).

Part of the charm (and frustration) of Scalextric was in building your own tracks and it’s disappointing that you lose that ability with Anki DRIVE, but the technology that powers the cars and track, combined with sheer joy of the Anki DRIVE experience soon washes away that disappointment. Maybe one day, there’ll be a way to piece together Anki DRIVE tracks to make your own, but right now, you’re limited to the track you get in the starter pack and a few more that have recently become available. However, the app itself has been updated a couple of times, adding new features and game modes, so there’s added bonuses to this experience too.

Although initially released exclusively for Apple devices, there is now an Anki DRIVE app for Android, which greatly expands the options available to parents. Previously, you really needed to be an Apple household to flex the multiplayer components of the game. Otherwise you were stuck racing against the AI, which while incredibly smart and fun to race against, doesn’t quite have the same draw as racing against your kids or your brother/sister etc. The sets themselves aren’t cheap, but they have got cheaper in the last 12 months, with the starter set sitting around £150 and new cars priced at £50 each. However, the expansion to Android certainly helps lower the bar to entry.