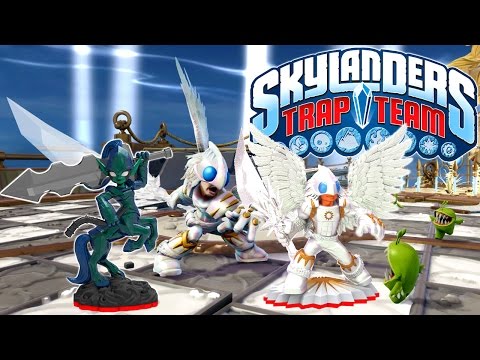 Since the release of Skylanders: Trap Team, a little over two months ago, fans of the game have been waiting patiently for information about the two new elements, Light and Dark. Well wait no longer! We’re happy (and a little relieved) to confirm that two new elemental themed Quest Packs will be launched in stores in the UK on December 26th. Each pack will contain a Trap Master, Trap and a Quest piece for their respective elements, further expanding the story of the game and giving players, new villains to trap.

The Light Elemental Quest Pack comes with Knight Light, a striking new humanoid Trap Master with huge wings and an even larger Traptanium blade. Inside the pack you also get a Light Trap with a Hawk design and the Sunscraper Spire Quest Piece, which unlocks an extra level in the game.

The Dark Elemental Quest Pack comes with Knightmare, a sinister looking Trap Master that appears to be a cross between an Elf and a Centaur. Knightmare is armed with a huge Traptanium Sword and sits upon a cool smokey base. Inside the pack you’ll also get a Dark Trap with a Spider design and the Midnight Museum Quest Piece.

Both of these new Trap Masters and Traps should grant you access to the Unknown Elemental Gates and allow you to trap the villains of an Unknown Element. This should mean that fans of the game can now try and 100% complete the game, as all areas should now be accessible and all villains trappable, as long as you have the right figures and traps!