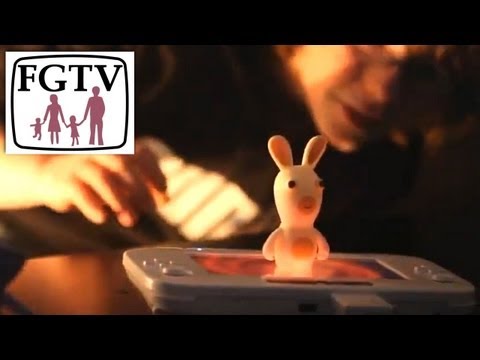 We take a stroll back through the history of Rayman with Jordan, our new Family Gamer TV presenter, and find out what has been happening to Rayman Legends the supposedly Wii U title now coming to every platform known to man.

Rayman Legends was supposed to be a launch title for the Wii U, but now isn’t due to come out until nine months after that. Its delay perhaps wouldn’t be such an issue for Wii U owners were it just so that Ubisoft could polish the game, but it was only after the Wii U had already been out for several months that owners discovered that the latter part of this delay was caused by efforts to port the game to other consoles: the PlayStation 3, the Xbox 360, and (as was recently announced) the PlayStation Vita.

You can tell that this wasn’t Ubisoft’s original plan, however, because what we’ve seen of Rayman Legends so far is fine-tuned for the Wii U. In particular, like with Ubisoft’s other Wii U title ZombiU, the game makes good use of the GamePad controller. As with some other Wii U games, you can play the platformer without the need for the TV, which could prevent a few fights. Rumours also surfaced a while back that the game would use the NFC (Near-Field Communication) technology, though Ubisoft has stated that the leaked video demonstrating this feature was just a marketing tool.

Most interesting and useful for my family is the fact that the GamePad adds a fifth player on top of the standard four. While the players using the Wii Remotes control characters like Rayman and Globox, the GamePad player directs a flying creature called Murfy. Mury doesn’t run and jump like the rest, but has the magical ability to manipulate objects in the level. He darts around the screen, moving platforms, cutting ropes, and even banishing enemies. My brothers and sisters argued over who would get to play as Murfy, but as well as being fun, this fifth character also provides a way to bring in less-skilled players, as the controls are as simple as pressing on the touch screen.

Of course, the original Rayman, which was released for the Atari Jaguar and first PlayStation in 1995, didn’t feature multiplayer at all, but there is still a place for this kind of solo platforming action. Rayman Jungle Run, the recent smart phone incarnation, for instance, features short levels for you to play in a stolen five minutes throughout the day. But for my large family, multiplayer is a big draw, and the ability to get five rather than four people involved is more of a selling point than it perhaps would be for others. So although they played Rayman Origins on the PS3, they’ll likely still want Rayman Legends on the Wii U.

Until August 30th however, my brothers and sisters will have to contend with the Rayman Legends Challenges App, released by Ubisoft as an apology to disgruntled Wii U owners. Even if the three demo levels lose their charm eventually, the two randomly generated challenge levels change daily and weekly. Besides, these challenges provide a good way for my siblings to compete with each other for high scores, until the game comes out and they can turn their focus to cooperation.