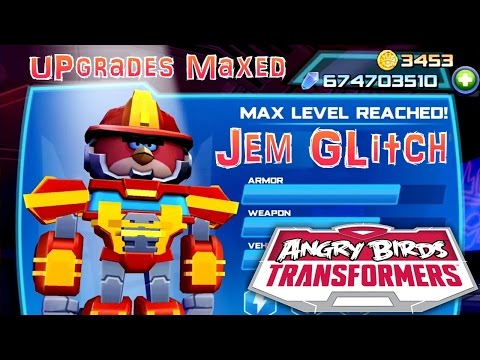 Angry Birds Transformers launches in the Apple Appstore on October 15th as a freemium game, which won’t cost you a penny to download. However, as we know in life, nothing comes for free and the same is true with Angry Birds Transformers. Much like the majority of freemium games available today, the game is supported by in-app purchases. Within the game, you exchange your hard earned cash for gems, with prices ranging from £2.99 for 150 gems, up to £69.99 for 5200 gems. Those gems can then be spent on upgrading each of the Angry Birds Transformers characters you manage to collect within the game. The first upgrade will cost you 16 gems, but by the 10th upgrade it will set you back 3000 gems!

As you can see, you need to invest some serious time or money into the game to upgrade the characters, but luckily for us, a bug in the game appears to have granted us over 674,000,000 gems. We have no idea how it happened and can’t reproduce it, but it does allow us the ability to show you the upgrade process, the costs involved and how those upgrades effect the gameplay experience. In the video we’ll look at Optimus Prime, Bumblebee, Soundwave, Bludgeon and Heat Wave, upgraded all the way to level 10. We’ll also see more team-ups with a variety of characters from Megatron to High Octane Bumblebee, a black iteration of the character available in the Bumblebee Blast Jenga set.