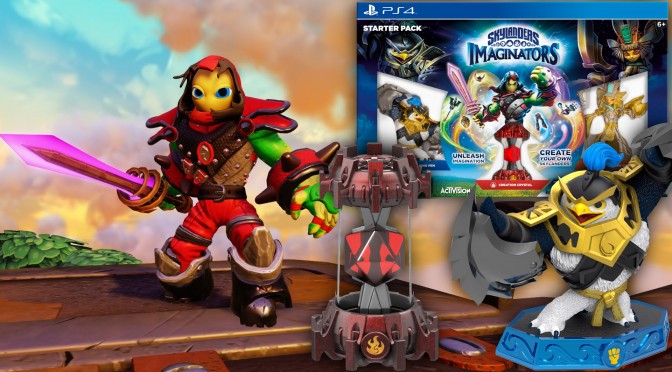 We have a hands on look at Skylanders Imaginators and talk to game producer Jeff Poffenbarger.

Along with 20 collectable Sensei figurines and playable Villain toys, Skylanders stay strong in the face of Disney Infinity’s cancellation.

The game will launch on October 16 in North America on PlayStation 3, PlayStation 4, Xbox 360, Xbox One and Nintendo Wii U. No mention of anything for Wii or handhelds at this stage.

Trying this out at the reveal event it felt both robust and simple. Although shying away from a full on RPG twist, this ability to design a character will be a strong hook for kids. Best of all is that the created characters always end up looking and sounding like Skylanders.

They look so good in fact that it feels like you should be able to create a physical version in some way. I asked Skylanders producer Jeff Poffenbarger, is there any plans in that direction. He wouldn’t be drawn though, “seems like a good idea, certainly we are exploring every avenue.”

Each Sensei can access one of the 10 powerful Battle Classes (Knight, Sorcerer, Brawler and so on) that means they can unlock the related Sky Chi ultimate Battle Class super move. Sensei Skylanders have a master-to-apprentice relationship with newly created Imaginator Skylanders seen in their unlocking of more unique Imaginator weapons, increase of Imaginator level caps and access to special areas.

Also new this time are 11 playable villain characters. These bring back star villains such as the Golden Queen in both toy and on-screen playable form. This is another nice touch and I hope they include some lesser bad guys such as Glumshanks.

To create a character you require a Creation Crystal toy, included in the Starter Pack. Children’s characters are then stored in the Crystal and can be used at friend’s house regardless of whether they have unlocked the same parts. As ever the game supports all the previous 300 or so toys from old Skylanders games, although there’s not place for the traps this time round.

In terms of game modes, Skylanders Imaginators will support local co-op multiplayer. Players can place two Creation Crystals or two toys or a combination of the Crystals and toys on the Portal of Power to play. At the reveal event there was also mention of the return of the kart racing part of the game, although this is as-yet not fleshed out.

Also of note is that we are without packaging for the Wii U game, which seems to suggest we will be seeing more Skylander-Amiibo cross over creations from Activision and Nintendo. Completely unconfirmed at this stage but it wouldn’t be a big leap to expect news on this soon. Perhaps the moment Mario and Yoshi will enter the Skylanders fray.

Add all this to the upcoming Skylanders Academy television series, and it certainly seems like full steam ahead for Skylanders this year. With Disney Infinity being cancelled there will be more pocket-money spending power up for grabs.