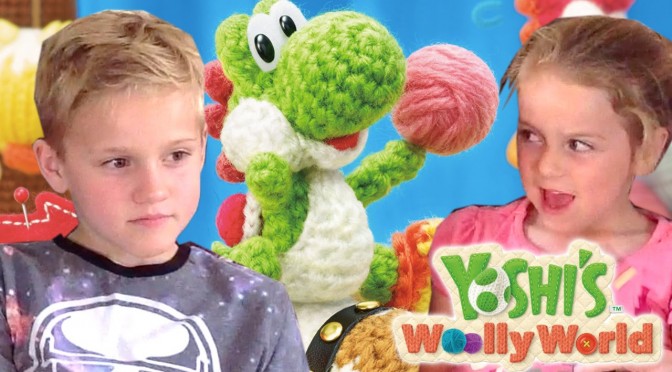 Yoshi’s Woolly World for Wii U and it’s accompanying woolly amiibo landed in Europe this month, ahead of their launch in North America later this year. Knowing how rare many amiibo are and seeing how cute these particular woolly amiibo are, we had to dash to the store on launch day to try and snag one. Returning triumphant with a pink Yoshi amiibo in hand, we sat down as a family to give the game a first look.

In many ways, Yoshi’s Woolly World is a spiritual successor to Kirby’s Epic Yarn on the Wii, using many of the same yarn based tricks to create a new and inventive platform game that feels like it was made with one purpose, to keep you smiling. Although quite a straightforward platformer, that’s certainly nowhere near as difficult as games like Donkey Kong Tropical Freeze, it still provides plenty of challenge for younger players and has enough secrets for most adults.

Hidden within each level of the game are five lots of yarn, which make up a unique version of Yoshi. Find them all and that Yoshi design becomes yours to use in future levels. Each design is beautifully crafted with everything from a Moo Moo Yoshi to a Shy Guy Yoshi and even a Mario Yoshi to collect. These designs can also be saved onto your amiibo and taken to play at your friends’. The amiibo also serves as an AI controlled partner if you’re playing solo and need a little help.