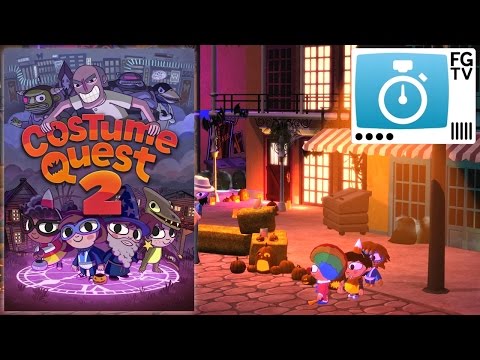 Along with the cartoon visuals and mature writing, one of the biggest draws is the costumes, everything from suspicious-looking clowns to bus throwing superheroes –each looks and functions differently in combat. Outside of combat the costumes are used to solves puzzles by using unique abilities to either advance in the story or get that last piece of a costume recipe.

2. Developer:
Like the first game, Costume Quest 2 was developed by Double Fine Productions and published by Midnight City. Double Fine has previously made games such as Grim Fangdango and Brutal Legends.

3. Format:
Costume Quest 2 is currently available on PC and will be on Xbox One,PS4,Xbox 360 PS3 and Wii U shortly.

4. Cost:
On the digital stores, Costume Quest 2 costs £10.99 for the PC version but pricing for other platforms have not yet been confirmed.

It should be noted that Costume Quest 2 is currently only available on digital stores .

5. Length:
Costume Quest 2 is roughly the same length of the first game which can be completed in 8 to 10 hours for the average player. There’s plenty for players to collect everything from creepy treat cards, to new costumes and stickers. Creepy Treat Cards are three time only ability that can be used within in combat to assist the player.

6. PEGI/ESRB rating:
PEGI rates Costume Quest 2 as only appropriate for those who are 7 or older, with content descriptors for “Non realistic Violence towards fantasy characters, violence that is set in a cartoon, slapstick or child like setting that could be upsetting to very young children and pictures or sound may be scary to young children.”
http://www.pegi.info/en/index/global_id/505/?searchString=costume+quest+2

ESRB
The ESRB gives Costume Quest a rating of E for Everyone 10+, with content descriptors for Cartoon Violence.

As with the first game “Throughout the course of the game, players will encounter enemies, triggering combat sequences in which the players will morph into a ‘real’ version of the costume they are wearing (e.g., a robot, a knight). Combat is controlled by are by pressing button sequences corresponding to on-screen prompts. Sound effects associated with battle are realistic at times.”
http://www.esrb.org/ratings/synopsis.jsp?Certificate=10012975&Title=Costume%20Quest%202&searchkeyword=costume%20quest

8. Common Sense Media:
Not yet reviewed.

9. Themes:
Costume Quest is set in a happy go lucky sub-urban area, but soon one of the children you play is kidnapped sending you on a magical adventure to save your sibling from the evil grasp of Dorsilla.
Much of the game is played at night as the children aim to foil their kidnappers, players who are sensitive abandonment themes may find it unsettling.

Opening doors can result in jump scares as cartoon monsters suddenly appear and attempt to steal your collected candy.
Being set in halloween means there are witches, monsters and magical costumes that may grate with those not comfortable with the supernatural.

10. Why people play:
Costume Quest 2 features the compelling art, writing, combat and quirky theme players loved in the first game. Being able to time travel through portals adds an extra layer to puzzle elements and breathes new life into the costume designs. With twelve new costumes and creepy treat cards galore, there’s plenty of content to keep players satisfied from now until Halloween.