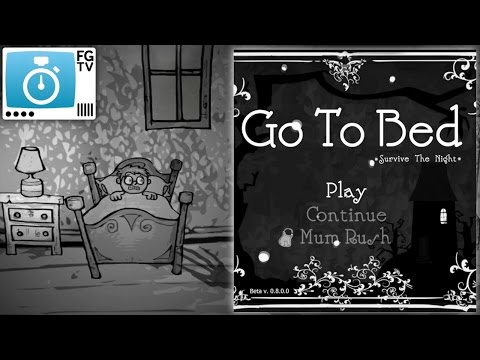 Everything you need to know about the new Indie game Go To bed. From what makes this game so enjoyable to what to watch out for, here is your ultimate 2 minute guide.

Genre and Story
Go To Bed is a face paced tap the objects style game, where players tap on approaching enemies to protect themselves from taking damage. Using a bedtime story aesthetic to set the scene, the game puts players in the roll of a young boy tucked up in bed scared of the dark. Players are tasked with tapping or clicking on increasing numbers of shadowy figures in order to keep them away from the young boy. Fail to keep them away from him and you’ll lose the game.

Players can save up orbs of light and choose when to use them to either stop enemies approaching for a few seconds or defeat all enemies on the screen at once. As these orbs of light are limited in number, the risk / reward nature or deciding when to use these adds an additional layer of challenge.

Format
The game will be available on PC and iOS devices. It is more difficult on PC than it is on iOS with more enemies attacking you more frequently, meaning that players need to know their level of skill in order to decide which platform will suit the best.

Duration
The game can in theory be beaten in around half an hour if the player manages to get through without dying, but any deaths will push the player back to the very start of the experience.

While the iOS version can be beaten by skilled players in just a few attempts lasting around 90 minutes, the PC version’s increased number of enemies and gameplay speed will likely cause players more of a challenge, giving a longer time to complete the game, but requiring players be more patient and willing to retry the game over and over to improve.

Age Rating
As Go To Bed is only being released digitally so it has not been rated by either PEGI or the ESRB.According to the developer the game is expected to receive a 9+ age rating when it launches on iOS.

Themes
Go To Bed does have some sensibilities of a horror game, but this mostly manifests as implied danger in the form of silhouettes that take on scary forms. Beginning with deformed stretched out hands reaching from the edge of the screen in toward the player, as the game continues you as the player will be closed in on by spiders, grim reaper esque figures, misshapen monster shadows and other similar types of enemies.

When tapped, these enemies either vanish, retreat off screen or, in the case of spiders, burst leaving a liquid splatter on screen for a few seconds. The splatter is white and clear but is implied to be blood.

The game touches on themes relating to nightmares, but does not go any deeper into exploring what has caused these nightmares in the child. If reached by too many monsters, the player character appears to be killed, with a ghost rising from his body toward the sky with x’s for eyes.

Why People Play
While Go To Bed’s gameplay is simple, strategy elements make it an enjoyable challenge. The fast pace at which the game switches between single tap enemies, multi-tap enemies and enemies that tapping will cause you to lose meant that I was constantly torn between going faster to do better, whilst not going so fast that I made any mistakes.

The game’s 1950’s Television presentation and the constant battle to keep a child safe from the things scaring them in the night kept me hooked for hours, with the stakes of the experience constantly pushing me to do better.

While all of the levels feature the same core structure, the progression through a single night and the way it sets up a visible goal to work toward made sinking time into trying to progress through the levels a rewarding experience. The game is responsive and challenging, but always felt fair. If I failed, it was because I needed to practice and get better, which is very important for this type of game.