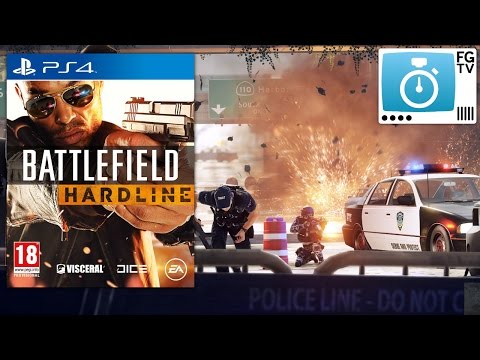 Parent’s guide to Battlefield Hardline, from what makes this game great to what to watch out for this is the ultimate 2 minute guide.

1. Genre
Battlefield Hardline is the latest in the Battlefield series of first-person shooters, games viewed from the eyes of the main character. The previous games in the series were about military situations, but Hardline features a different kind of war, between police and criminals.

In the single-player campaign, players play through an “episodic crime drama” as a detective called Nick Mendoza. In the online multi-player mode, players can play as either cops or criminals in various modes that pit the two against each other. Aside from more traditional “deathmatch” and “capture the flag” style modes, there are also multiplayer modes that fit better with the cops vs criminals theme. In Heist, for example, the criminals have to infiltrate a vault, steal two bags of cash, and take them to base points, while the cops have to stop them.

Battlefield Hardline will likely feel similar to previous Battlefield games to play, but the crime theme and modes bring it closer to the online multiplayer of GTA V.

2. Story
Hardline’s single-player campaign is made up of ten episodes and a prologue. Nick Mendoza and his sidekick Khai carry out various missions dealing with criminals in Miami. Since they’re cops, guns are only a part of their toolset. They also have their badges, police scanners, and various gadgets.

3. Developer
Developer Visceral Games is better known for the Dead Space series, and also made Army of Two: The Devil’s Cartel.

5. Duration and Difficulty
The single-player campaign varies in duration depending on how a player chooses to play, but with ten missions it is expected to last around 10 hours. Those who want to play the online multiplayer will spend more time with the game.

6. UK Rating
In the UK and Europe, PEGI rates Battlefield Hardline as only appropriate for those aged 18 and older for “violence against vulnerable and defenceless persons, frequent strong language and glamorisation of the use of illegal drugs.”
http://www.pegi.info/en/index/global_id/505/?searchString=battlefield+hardline

The GRA expands on its PEGI details, explaining that the game “revolves around police corruption and Miami’s drug war”, that the multiplayer allows players to “beat and shoot at restrained hostages with bags over their heads”, which is met “with flinching and blood splatters, though the hostages will not die”, and that there are “frequent uses” of the “f” word. The GRA also adds that the game “features online playing capability which may involve real-time interaction with other players.”
http://gamesratingauthority.org/pegi/search_aci.html

In the US, the ESRB rates Battlefield Hardline M for Mature, with content descriptors for Blood and Gore, Intense Violence, Strong Language, and Use of Drugs. The rating summary describes the “firearms and tactical gear (e.g., pistols, shotguns, rifles, machine guns, grenades, tasers)” and violent effects of the player’s actions: “realistic gunfire, screams of pain, and blood splatter effects. Cutscenes depict more intense acts of violence: a man shot in the head at close range; an unarmed character shot in the chest. In one sequence, a corpse is depicted with its legs chewed off.” Enemies are shown taking drugs like cocaine and marijuana, and the “f” and “s” words appear in the dialogue.
http://www.esrb.org/ratings/synopsis.jsp?Certificate=33804&Title=Battlefield%u2122%20Hardline

Lobby group Common Sense Media hasn’t yet rated Battlefield Hardline but rates recent games in the series as “not for kids”.
https://www.commonsensemedia.org/search/battlefield

8. Themes
Battlefield Hardline covers the issue of police corruption. Some people may feel that making entertainment about armed police is insensitive at a time when there have been several recent high-profile cases of police in the US shooting and killing unarmed people.

9. Why people play:
The Battlefield series has traditionally been known as a competitor to Call of Duty, another military shooter with similar storylines and mechanics. Battlefield Hardline changes things up with its story of cops vs criminals; while the change of scenery is refreshing enough in itself, the reduced reliance on guns and the introduction of various ways to play each mission makes this an interesting take on the overly familiar formula.